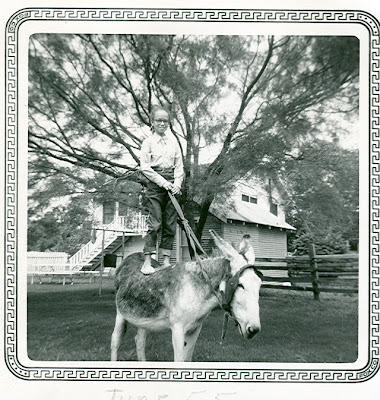 This is the first donkey I ever remember interacting with. Almost every summer I would spend a couple of weeks visiting with an aunt & uncle in Coolidge, Texas. If you've never heard of Coolidge, don't feel bad. Even then it was just barely a speck on any map. It's between Mexia & Hubbard, sorta east of Waco.

If ever there was a kid's paradise, Coolidge was it. Jay was a blacksmith, had a large building in the middle of town, that I remember was very hot because of the open fires he & his employees used to work the metal. The farmers use to bring big old cotton mules in to be shod. I remember watching him shoe these huge animals, that weren't the least big interested in having shoes on, let alone having their feet picked up. It was not a pleasant experience, for them or for him, especially in the hot humid climate of the Texas Hill Country.

There were plenty of kids in town, that didn't care if I just showed up every summer, they always welcomed me back. The whole town was our playground, we even played in the old jail that hadn't been used for a long time.

Summer's were busy for Jay & Dudda, all the kids in the family I think took advantage of their wonderful hospitality. Jay had a couple of farms & always brought in horses & Kix the donkey for us to play with. I'm sure Kix was never thrilled with having his quiet life interrupted by city kids coming into town for a visit. This is about as excited as he ever got. We even had a wagon of sorts that we hooked him up to. He would pull it around for awhile, but when he decided he'd had enough, we left him & the wagon wherever we happened to be. Usually it was in the road, the cars just drove around him until he decided to move. Years later I heard that he had gotten a piece of wire wrapped around his leg out at the farm & by the time he was found, it had gotten so infected they put him down. A sad ending for a dear friend who gave me many hours of pleasure as a child.
Posted by Tish at 1:04 PM