BEANS ARE DISAPPEARING OFF THE PROPERTY

Maybe not the way we would prefer, but every day in the couple of hours the donkeys are out in the afternoon, their heads are down and they are doing their best to pick up every bean they find.

This is some of the donkeys from the Burro Barracks headed out for the "gold" field.  There is an area northwest of the house that was really difficult to pick up.  The blower got some of them out of the rocks to where they could be raked, but the ground had so much gravel and rocks that we finally gave up.  The donkeys had no problem finding the area with the most beans and they remember it each day when they are let out.  That is one reason they only get out for a couple of hours a day.

We're doing Poo 101 observation in the morning when we pick up poo.  So far their poo isn't heavy on beans and we haven't had anyone go off their feed with a tummy ache, for which we are grateful.  We will gradually up their time out until they are out all afternoon.  It might be awhile before they stay out overnight or get to go into Burroland.  So far, so good.......!!!

Yesterday Suzanne picked up this cute little hut from Oliver, Siggy and Harley's home, a donation to the rescue that is deeply appreciated.  It's all metal and heavy plastic and doesn't look very appetizing, so it shouldn't get nibbled on. 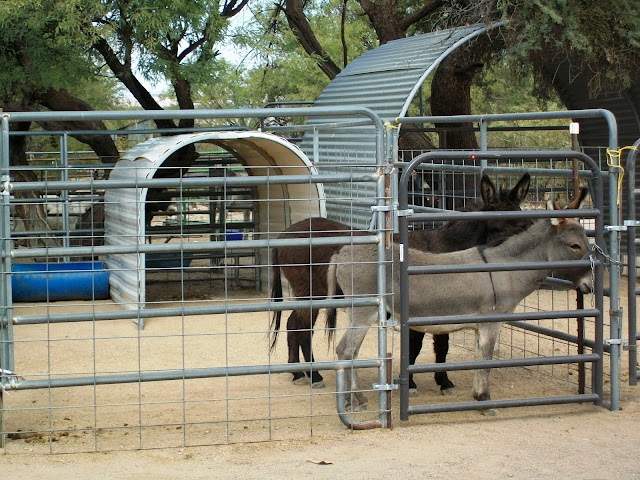 It is perfect for minis, so La'Roy and Jackson got it since La'Roy didn't have a shelter in his pen.  The pen Oliver, Siggy and Harley are in has a shelter that Oliver can actually fit in.  Susan said Oliver liked to go partially in the hut and scratch his back.......!!  Since he is a large standard, he couldn't get all of him in it. 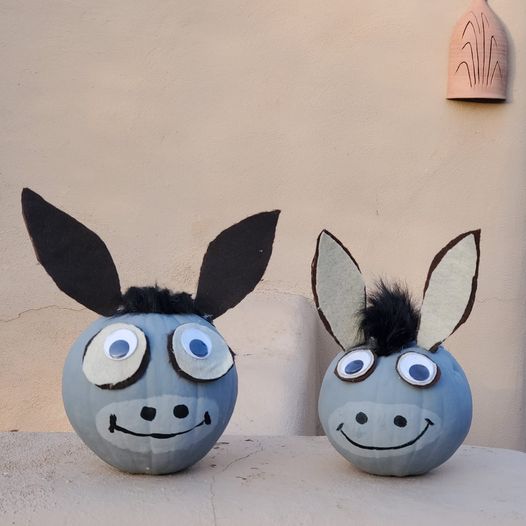 We have two new donkeys that Linda made for Halloween, they really turned out cute. 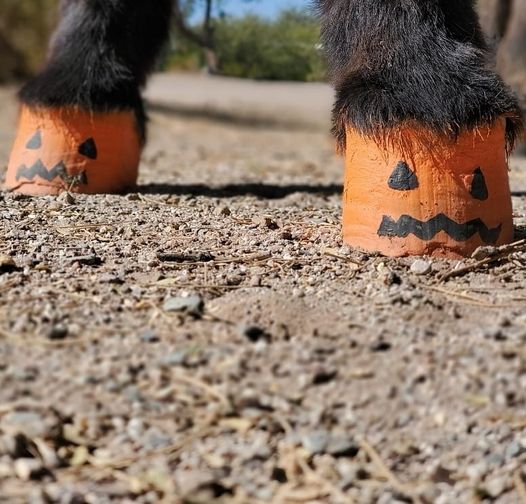 She even made jack-o-lanterns out of Cisco and Buddy's feet.  They weren't her first choice, but they were the ones that would stand still long enough for the paint to dry between layers. 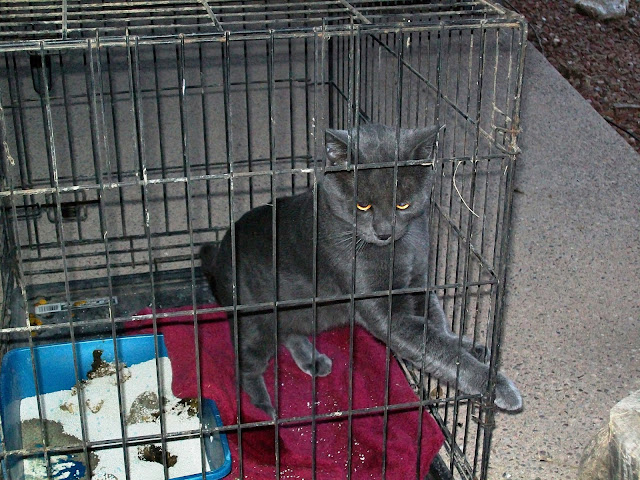 We now have 6 cats I guess.  Nigel, Moogee, Sunny and Snooky are indoor cats.  A few years ago we fed 2 cats outdoors.  Hobo disappeared and her son Julius decided he wanted to be an indoor/outdoor cat, so he comes and goes at will.

Recently Smoky started showing up when John put out dry food for Julius on a regular basis.  If you live in the country people seem to think you need more dogs and cats, he was probably dumped.  He was a tomcat and we are pretty adamant about spaying, neutering, gelding, depending on which one needs to be done.  So John put some yummy cat food in a live trap and off to the vet Smoky went.  The clinic wanted him kept inside for 4 days.  Just because a cat has been neutered, doesn't mean the smell of tomcat goes away immediately.  We had him in the spa room and enough is enough, so we turned him loose on the 3rd day. Phew....!!  Had no idea if we'd ever see him again, but there he was for his afternoon feeding, and he doesn't seem to hold a grudge.  He will let John scratch his head, so he'll probably end up an indoor/outdoor cat like Julius.