The donkeys are staying in at night.  Every morning we do Poo101 when cleaning the pens and so far there aren't very many beans showing up.  I guess we did a better job of raking and picking up than we thought.

Awhile back a couple of the range bulls got in a fight and wadded up one of the corner fences that is between Burroland and the 10 acres where the pens are and where they get to roam on in the afternoon. As soon as that gets fixed I think we can let them out over there.  The range cattle have cleaned it pretty good.  Don't know if we'll ever get them back or not once they are going over there.  The first 2 or 3 days they were out on the 10 acres it was like herding cats when it was time to go back to their pens.  In that situation you have to pick one and follow that one until they figure out you aren't going to give up.  Sometimes there will be 2 or 3 together and as you "worry" them some might turn a different direction, but you stay with your original victim.  Of course the ones that turned away think they escaped, so by the next day they are feeling invincible. LOL

Yesterday we took 6 of the donkeys out to Cochise RV Resort for show and tell.  People really like to see the donkeys and the donkeys have learned to play to the people for attention.  Some of them have tricks like sticking their tongues out to the side of their mouth, hoping the people will give them a treat. 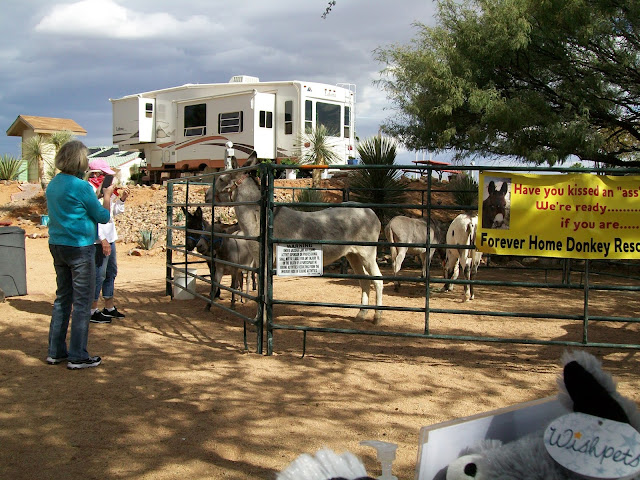 For years Jasper has been a stay at home kind of guy.  He was overweight when he came to us and had very sore feet.  His feet are still sore off and on, but we have found out he really likes going on outings and interacting with the people.  He is the big grey donkey staring at the women taking pictures.  I observed him all day, he watches the people and as soon as they walk up, he presents himself for pets and treats.  This was his 2nd outing and he will probably go on any outings like this in the future.  Most of the donkeys like to go, but I've never seen any of them get as involved as he was. 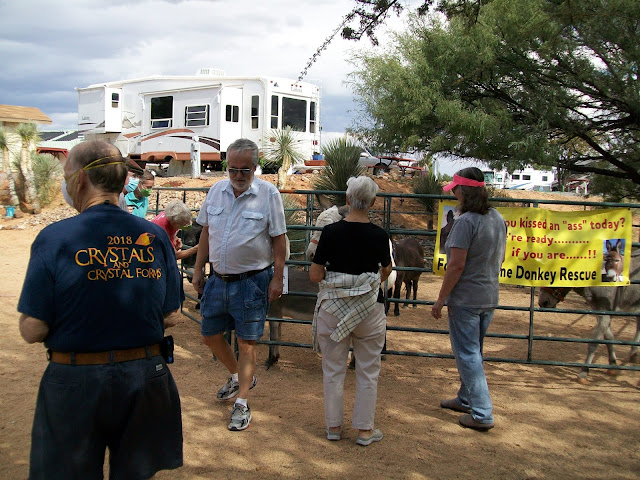 It's suppose to start getting cooler, hopefully we'll be able to take Macho Man up to Gilbert to have the scar tissue taken off his sheath soon.  We had been getting a little blasie' about putting fly masks on everyone and I am now doctoring Boaz, Cisco and Macho Man for habronema under their eyes.  The flies are getting up before we do and have time to drop the habronema eggs in their eyes before we go out and put fly masks on.  These nasty little larvae cause so much damage to the skin and tissue and cause itching which causes the donkeys to scratch and cause more damage.  Hopefully the weather will get cool as forecasted and stay that way.  Usually by this time of year we're done with fly masks.

Wish I could send you some rain, I am on the west coast of Florida and we are having lots of rain from the tropical storm. Tornado warnings now. I love rain but not the storms.

WE could sure use it, everything is so dry even for the desert. Where do you live on the west coast. My folks had a 4 acre plot of land in the swamp between Floral City and Inverness for about 10 years. My mother called it an island, and I guess it was, you could only reach it by a bridge on one end of the road and a bridge on the other end.

I live south of Tampa in a small farming town "Ruskin" our big crop is tomatoes but a lot of veggies. We have a tomato festival and strawberry festival every year. Oranges are fading out here since the greening thing took over so many groves. Most of our oranges here go for juice. My son in law turned most of his land into sod fields which is a big business here. He has a small grove and sells to the juice plant. FFA is a big thing in the high schools since there are so many farm kids in school and kids that want to learn about animals. My grand daughter was in FFA for 4 years and now goes to an agriculture school in Tifton, Ga. She is interested in large animal vet assistant work.

The college name is Abraham Baldwin, it left my mind a while ago when I was typing.

Who knows she might go for full vet someday, I don't know how much more schooling she'd have to have. Linda one of our volunteers is taking Vet Tech classes on line. She's about half way thru and is taking this semester off, although she is still doing her in clinic training at one of the local vet clinics one day a week. When we lived in Calif they raised lots of tomatoes around us. During the season there would be tomatoes all over the roads where they would lose tomatoes when they went around corners. I even went thru a Chef Bo ardee(sp) factory on a tour. We also had a dried onion factory where we lived, the air always smelled like dehydrated onions....!! LOL They had a lot of nut orchards and were in the process of pulling the trees out and putting in subdivisions, there probably aren't any nut trees left now. Just like they've done the citrus orchards in FL. Daddy asked an old timer after a cold snap that damaged the crop that year why they put orchards where it would get cold. The man said in the 20s a bunch of people came in, the weather had been good for awhile and they started putting in orchards on the outskirts of where the citrus orchards were and the land was cheaper. They had good weather until in the 1980s when they started having colder weather and losing trees. And of course there is always the dreaded subdivision to be built, when the land becomes more valuable for that than being farmed.

My son in laws grove and sod fields have been in the family for 6 generations, he said he will never sell it, it is way out in the country and very few of the old farmers there don't plan to sell but then the kids come in and want to make a few dollars and sell the farm or groves. They feed a lot of the cull tomatoes to the cows here. They dump truck loads in the pasture fields. I don't see any on the roads though.

I do enjoy your blog and hearing from you. Thanks