TONIGHT THEY WILL GET TO ROAM ALL NIGHT LONG......

They've done so good during the day tonight John will let them out at bedtime to do donkey stuff all night.  It's been really cold here, in the low 20s when we wake up in the morning.  This way they can choose where they want to be.  I've always said in the summer you can tell the coolest place on the property and in the winter the warmest place.  They all come out of their pens like they've been in prison, doesn't matter if it's raining or the wind blowing, they want OUT.........!!!

Had a couple come out today to visit with the donkeys and are interested in adopting Anazazi and her mother Kachina.  We had talked about sending Ana up to Colorado because she has issues with skin problems in the summer.  But a good home locally, with her mother and people that realize she will take extra care in the summer sounds like a good deal for the girls.  So we will do a home study next week.

We also have another home study next week.  A nice couple came out, to see the donkeys and already have a little mini.  They fell in love with Sasha and Bella and everything was falling into place, until they remembered their little guy hasn't been gelded.  Well I'm sure the girls would have been thrilled, BUT, we don't allow breeding of our rescues.  But it might be a good home for a gelding.  We have adopted a gelding as a companion with a jack before and it worked out just fine.  So we'll go check it out and talk with the people some more.  And also see what kind of personality their little guy has.

We can't let them into Burroland until the corner fence is fixed where the range bulls had an altercation and the fence suffered.  It will get fixed next week, hopefully.

John got a good deal on metal siding for the shelters, he's got to get 2x4s and cement and whatever else the job will require.  Then we can put out the word and get some helpers to make the job easier hopefully.  So many of the shelters have been completely eaten this summer, there's no walls left to protect them from the wind.  Usually our weather doesn't get wintery until after Christmas, so we haven't been in any hurry, especially since a lot of October was 100* or more, it's hard to get enthused about working outside when it's that hot.  So now the high today is 70*......!!  We dress in layers......LOL 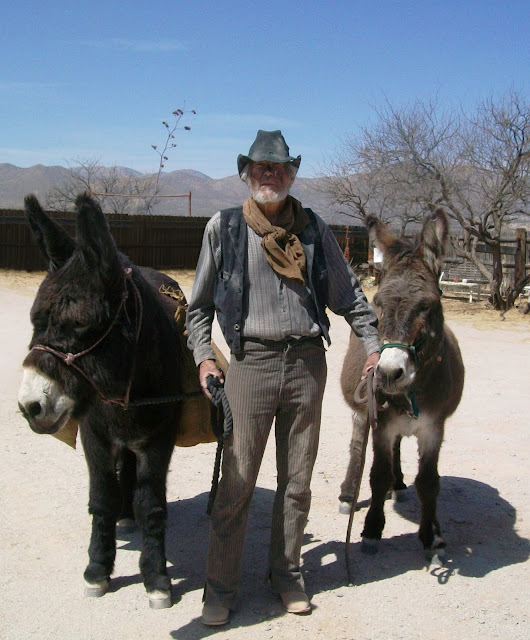 Thought I'd share this picture from the past of John with BlackJack and Cisco a few years ago.  They were in a movie that was being filmed over at Gammon's Gulch, which is just a stone's throw up the road from us.

Blackjack was our 1st donkey about 23 years ago.  In the next year we got 4 more donkeys and Cisco was one of them.  Cisco and Buddy Brat are the only 2 left, Buster, Pepper are both gone.  Tonight Cisco will be blanketed, the last two mornings we've put a blanket on him but he was already cold.  The problem in the desert is, it's still warm until later in the night, and right before sunrise it's usually the coldest.  So he might be a little too warm for a few hours, but I'm pretty sure he will appreciate having the blanket when the sun comes up......!!