KACHINA and ANAZAZI will be going to their Forever Home next week...

We did a home study today and think this will be a great home for these two girls.  The people do dog rescue, and spend all their time with their animals, including a horse.  They will have plenty of room to stretch their legs and will even have a nice shelter, if they don't eat it.  It's all wood, but after we told them the girls eat wood like beavers, they will be putting chicken wire or something over the wood to protect it.  We'll probably take them to their new home, Sunday. 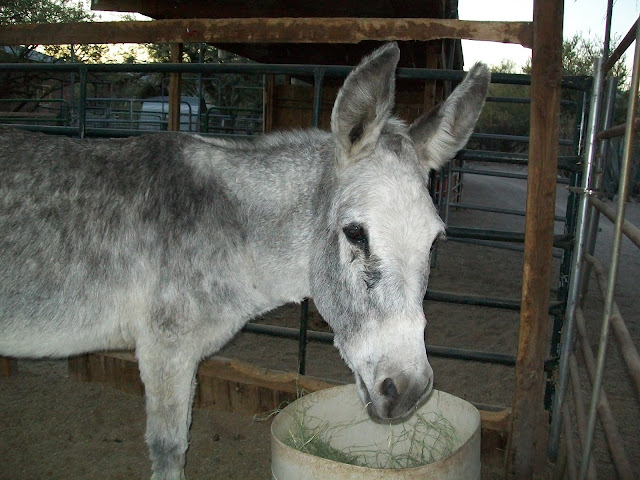 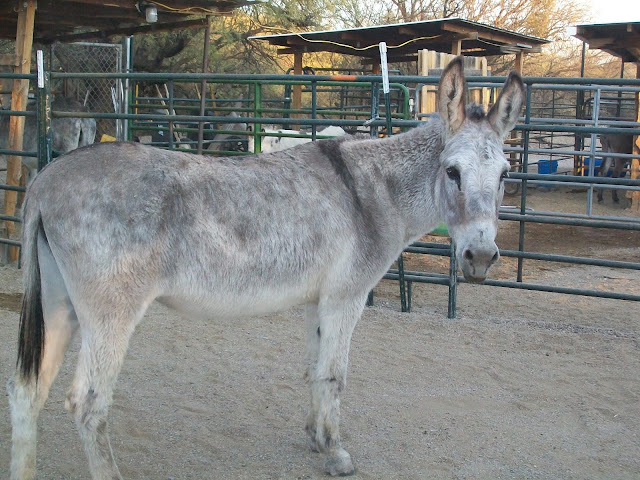 Yesterday Suzanne and I went up to Oliver, Siggy and Harley's old home close to Casa Grande to buy some corral panels.  I guess the people are afraid if they keep all the structure for equine they might get some more.  We really need the corral panels some of ours are pretty old and rusty.  It's a good thing the donkeys aren't fence challengers.  These are really nice and sturdy, they have some more that they are planning to get rid of and will give us first choice.

Yesterday morning Casper the mini mule was acting punky, almost like he had a belly ache, bad enough to not eat, but not bad enough to call the vet.  Nothing has changed, although we had planned on letting the donkeys onto the 20 acres we call Burroland in the afternoon.  Before doing that John and I took the golf cart over for a look around, just to make sure the range cattle had eaten the beans.  There were a few and quite a few areas where the assorted types of rodents had made the mesquite bean pods into crumbs.  We also noticed little bitty foot prints EVERYWHERE, just about Casper's size.  I guess he figured we weren't being fair to them, by closing off Burroland, so he decided to go back to his old ways of camo crawling under the barbed wire fence and going where he wanted to.  He is smart enough to make sure he's here front and center, at feeding time........!!!!

The donkeys went into Burroland Tuesday afternoon for the first time since early July for a couple of hours.  Almost all of them found out the gate was open and took advantage of the opportunity.  Although Cochise was by the pens when I went out to open the gate along with about 5 others.  They all followed me over there, except for Cochise, and he stayed in the same place by the pens all afternoon, while everyone else was enjoying new territory, even the ones that had never been over there.

We had no idea what would happen when the 2 hours was up and it was time to come in for supper.  But they really did good considering about half of them had never been over there and had never had to come in because we were asking them to.  They didn't get to go over there this afternoon because we were gone to do the home study.  But tomorrow afternoon we'll let them out again.  As long as they don't pig out on mesquite beans, we'll start letting them out earlier every day.  So we'll be doing POO101 when we pick up poo for awhile.