It sounds like the 3 trailers will be heading south from Colorado this week-end.  A couple of the trucks needed some work before they hit the road and that's being done today and tomorrow.  If everything goes smoothly, they will head out Saturday and should be here Sunday afternoon.  They got 3 trailers filled with donkeys, I'm not sure what the count is.

Yesterday John and I spent the morning working in the dog pen to try to protect the remaining 2 trees from Casper's teeth.

John put Casper in there and you could almost see the confusion on his face he knew what it looked like the last time he was in there.  He walked around the corral panels and checked every inch of them, they weren't there the last time he was in there and I guess he was trying to figure out why they were there.
Once the dogs get back, they'll be in the pen, most of the time, so he'll probably lose his afternoon outing.  The problem with him is his ability to camo crawl under the corral panels.  So he can't go in any pen that is made of corral panels, at least if you want him to be there when you check on him later.
I took a new picture of Macho Man's leg this morning when I was doctoring.  I would imagine it looks worse to most people, but it actually is better. 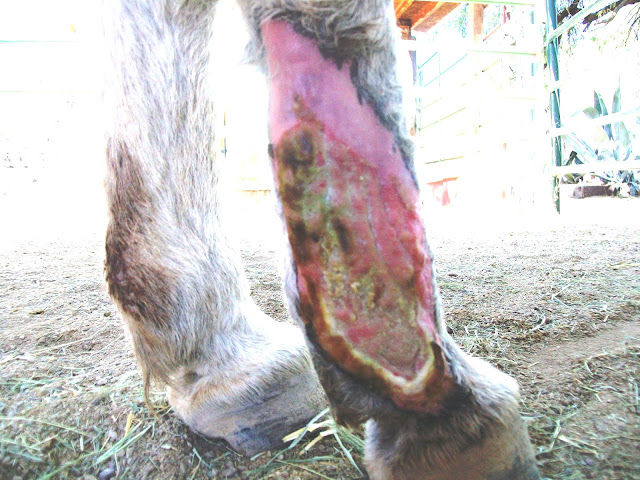 The pink area on the outer edge is healthy skin.  The whiteish/gray area isn't really proud flesh, but it is breaking down and being replaced by the darker pink area underneath.  Down at the bottom is a ridge of the grayish area that has a dried dark crust, that is making it harder to get the medicine where it needs to be.  Occasionally it will loosen at the edge and I can cut it off, but it's a long slow process.
Macho is so spoiled after daily bandage changes, every time I stand up from doctoring he expects an animal cracker.  If and when it ever cools off, we plan on taking him up to the specialty clinic in Gilbert to have the scar tissue removed from his sheath.  If by then I haven't gotten the hard crust off, I'm sure they can clean up his leg and maybe it will heal quicker. 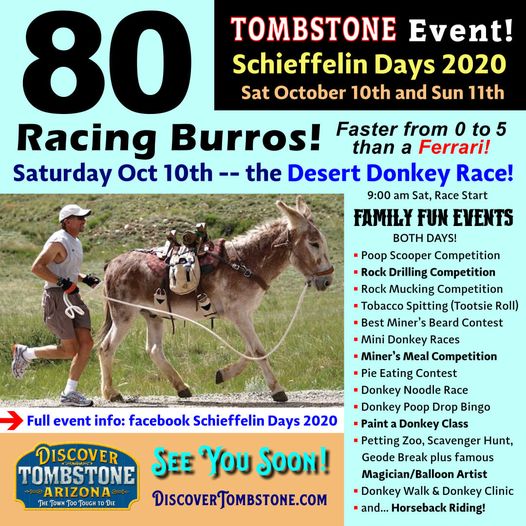 When they get back, they will hit the ground running, to prepare for the Desert Donkey Dash at Tombstone on the 10th of October.  This will be only the 2nd donkey race in Arizona in many years.  Last year at this time the 1st one was held in Superior, AZ, they had over 60 burro/person teams and it looks like there will be even more teams in Tombstone.
We will have a table set up to share information about donkeys and the rescue. Once the teams start the race it takes awhile for them to run 3-12 miles.  There will be lots of entertainment going on for people to enjoy while they wait for the teams to get back to town.  If you're in SE Arizona October the 10th, this is really going to be an exciting day and hopefully the beginning of an annual event for the Town Too Tough to Die.........!!

It is exciting to know the three trucks will be on the road soon. I wish I could see them traveling down the highway, it must be a beautiful site like a little parade. Prayers for safe travels and healthy donkeys.