John found some more areas that needed to be debulked of beans yesterday afternoon, so the donkeys didn't get to go out.  But we've got our fingers crossed for today.  I'm wondering how much fun it will be to get them back in their pens if they do get to go out........!!!  LOL

Here is a nice video when people and donkeys took a side trip to the Grand Canyon on their way to California to a race sponsored by the California Breakfast Burritos in Ridgecrest, CA.  Don't want to brag, BUT, Muzzy and Lynn finished 1st in the 26 miles race out there and Benji and his person team mate Patrick won the 10 mile race.                    Going down into the Grand Canyon

The California Breakfast  Burritos is an organization of people in CA sharing their love of pack burro racing with others and are involved in helping non-profits.  This year we were the recipients of their generosity, which was very much appreciated. Hopefully in the years to come, there will be pack burro racing in many states, rather than just Colorado.  Arizona has had 2 races, California one, N.M. hasn't had a race yet, but people have hauled their donkeys to some of the other states and they would like to have races at home.  The states will have to rely on their own states in the future and not expect runners to haul 100s of miles to run.  In the last few years pack burro racing has really exploded, hopefully it will continue to grow and bring lots of new faces into the sport.

This is Big Gus showing off his latest renovation of his pen.  He seems pretty proud of the hole he dug.  We've been calling it an "ass hole".................! LOL  Unfortunately he isn't the only digger we have.  Since they have been in their pens so long, quite a few of them have learned all sorts of new skills, that aren't appreciated by humans. 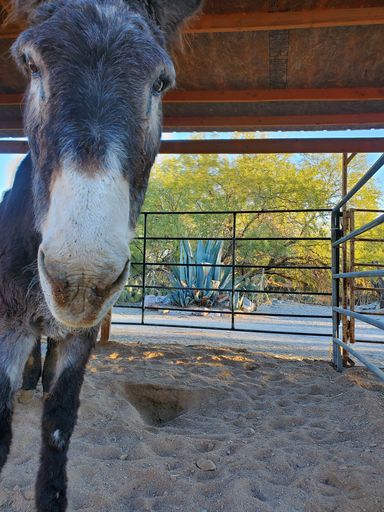 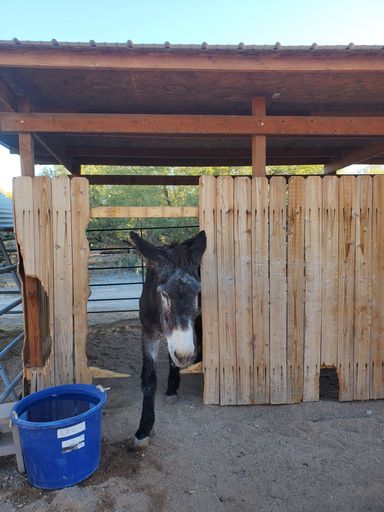 He is also skilled at making a door where there use to be a wall.  Almost all the shelters have been dismantled or completely destroyed.  When Lynn and Linda came back our first priority was to get the donkeys out of their pens, which hopefully will happen today.  After that the next priority will be to rebuild a lot of shelters with metal siding, rather than wood.
As of yesterday our head count is 38 donkeys and Casper the mini mule.  We had 2 minis and a large standard BLM donkey come in from a caring home, but the people are older and chores have become a chore rather than enjoying being with the donkeys. 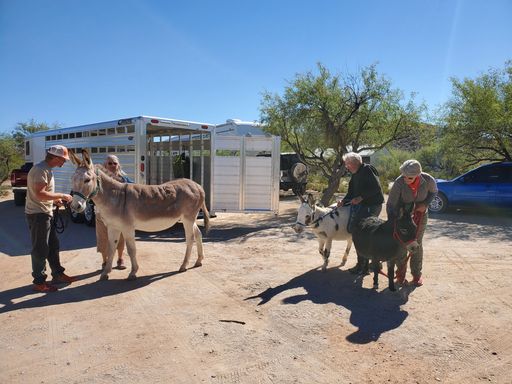 They arrived in a real nice trailer, Oliver on the left, Harley and little Siggy. 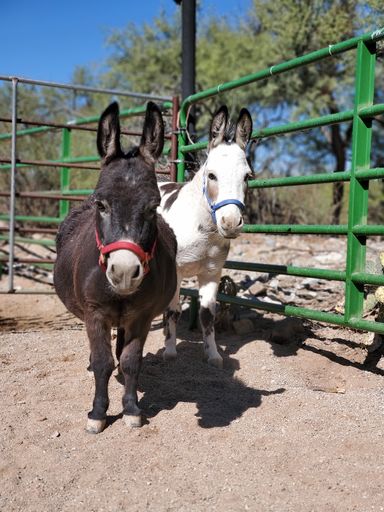 Siggy is only 28 inches tall, which makes him a micro-mini.  Any donkey less than 30 inches tall is a micro.  You might notice both of them are a little plump for their height. 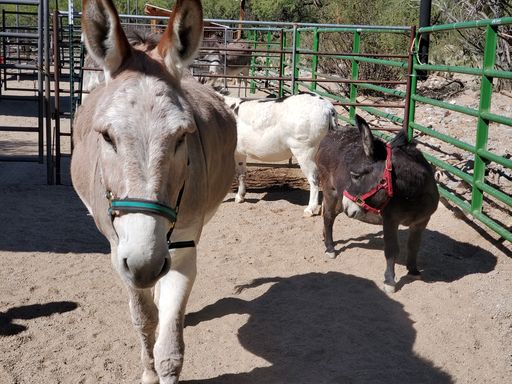 Oliver, is a large standard and also is a little plump for his height.  Over the years most of the donkeys we've taken in, have been overweight rather than underweight.  All 3 of them are really nice donkeys.  It's really hard to get weight off them and takes months, so they will probably be here awhile.  I have a really good home that is looking for a mini as a companion for their donkeys, but first they will have to go thru "donkey Jenny Craig"..........!!! LOL
Smoky the feral cat got his "brain" surgery yesterday as planned.  They don't want him jumping around for 4 days, so he's in a wire cage in the spa room.  We shut the door, so the 4 indoor cats couldn't lay down in front of the cage and stare at him.  You would have thought we had ruined their lives forever, they just can't stand the idea of not being able to go EVERYWHERE in the house, as they usually do.  He's actually pretty mellow for a feral cat, he'll probably end up an indoor/outdoor cat like Julius, if he doesn't take off, never to be seen again......!!!  The other 4 probably would disappear if they went outside, they aren't use to having to watch for coyotes and snakes, not to mention hawks.

Steve Harvey announced and showed some rescues that he will be starting a new 10 show series on. It was animals of all kinds, I mean farm animals. Looks like it might be very interesting. He ended up bringing two puppies home to his house from one rescue.

I JUST SO ENJOY YOUR BLOG. THE VIDEOS OF THE GRAND CANYON AND CALIFORNIA RUN WAS JUST FUN TO WATCH. MANY YEARS AGO, WE TOOK THE MULE TRIP DOWN THE CANYON. I JUST LOVED IT AND MY MULE BY THE END OF THE TRIP.

Good to hear about Steve Harvey, it's amazing how many entertainers are heavily involved with animal rescue. We had a mini horse go to a rescue in Texas that Willie Nelson is involved with years ago.

I'm glad you enjoy the blog Dalrene, it's nice to know when people read it. I've head the mules in the Grand Canyon have a sense of humor when it comes to going around the hair pin turns. I've heard they will get real close to the edge to "entertain" the rider. Not funny..........LOL