THIS HAS NOT BEEN A GOOD WEEK

Suzanne called from Colorado last Thursday to tell us Quilla was walking like he was drunk.  All of his vitals were good he was eating and drinking, so my first thought was he had a stroke.  She said they had already thought that too.  They sent a video of him walking and another one the following morning which showed no change in walking ability.

With equine the first 24-48 hours give you a good idea of whether they will survive and have quality of life with a stroke.  Doc Howard came out to give Quilla a  dignified death, rather than living in a situation that would have the same ending, after days, weeks or months of deterioration.  We have faced this decision many times and have thought more than once we probably should have  made the decision sooner.  There comes a time when I think you hold on for your sake, not the animal that relies on you to make the best decision for them.

The earliest pictures I have of Quilla were in February 2008, I assume that is about when he came here.  He had been in the same home for 9 years and the woman was proud of the fact that she had never had a vet or had his teeth done, and judging from the way his feet looked when he came in, a farrier wasn't used either.  She had gotten him as a companion for her horse and had no use for him when horse died.  He had been overfed, was obese and his feet was so long the walls had collapsed and he was walking on them. 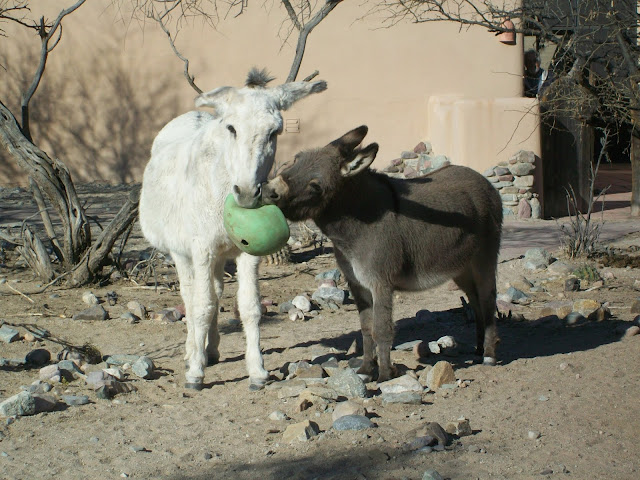 Quilla and Pepsi playing with a jolly ball, February 2008
We got his feet trimmed, put him on a diet and doctored him legs every summer.  He always attracted flies and they had chewed on his lower legs so much, the hair follicles had given up trying to produce hair and his lower front legs were bald.  When he started going out in public for parades, we always kept his legs wrapped, so people wouldn't asked what was wrong with his legs. 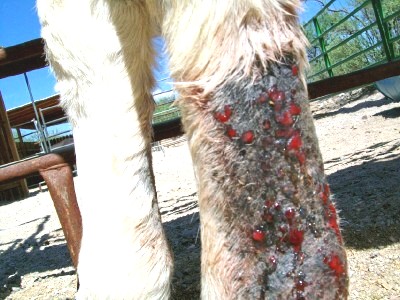 When he came here he was scared to death of kids, didn't want anything to do with them.  Once he found out they would pet and shower him with attention he became quite a kid magnet.  People were drawn to him I've always thought it was his eyes, they were so expressive.  He always used his ears to communicate, I never saw his ears perked upright.  They were always sideways, moving around to express his feelings. 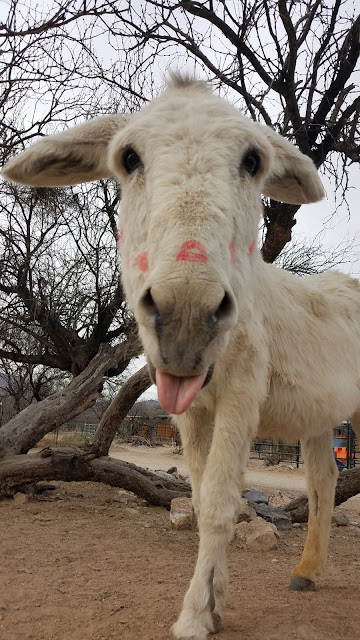 I guess this was his opinion of Linda kissing his face and taking pictures on Valentine's day.
Years ago he was diagnosed with Cushing's disease, which is quite common for older equine.  He has been on daily medication for years and in the past couple of years has become quite uncooperative about taking the little daily capsule, no matter what type of goodie we hid it in.  It had become a battle of wills to get the capsule down him, Linda usually won, but not without a struggle.  I'm sure she won't miss that, but I know she will miss him.
He has been going to Colorado for the summer for the last 3 years, his legs don't have to be doctored hardly at all because of the cooler weather and less flies.  Last year he went down in the trailer coming home in the last 50 miles of the 600 mile trip.  They always do it in two days, so the donkeys don't get stressed.  This year we debated him going, I'm so glad he got to go again.  He had Sugar as a girlfriend, in fact I think they said he had a couple of girlfriends, but Sugar was special.  He also got to strut his stuff  earlier in the summer and Linda happened to get it on video.
This was right after they got up there probably in June sometime.  This is the best I've seen him move in years.  Sounds like Lynn was egging him on and he was really strutting his stuff.

I have always said we are selfish for wanting to keep them around. Goodbye sweet Quilla.

What a sweet boy. Loved and cared for. Rest In Peace good boy. Your were a good boy.

I loved his eyes...like pools and the softest ears. RIP dear sweet Quilla...Tequilla...Willa. Not sure when I started calling him that.