Although we have hit 100* the last couple of days the nights are really cool and we've been able to open the windows at night.  Great sleeping weather......!!

Suzanne loaded Koshare' up a couple of days ago and headed for Colorado to help bring all the donkeys home from their summer vacation.  Koshare' has too strong a relationship with his momma and sister, Kachina and Anazazi.  Hopefully when he gets back, he will have discovered other donkeys and the pleasures of running with a person.  It will only be a few days, but Suzanne said he's adjusting nicely, I guess the old saying "out of sight, out of mind" might be true in his case.  They put him in with Link the 1st night and they got along just fine.  Haven't heard anything else, they are going to a race this week-end.  Hopefully they'll share pictures or videos.

This morning Wendy and Gary came out to help with chores.  They are such good self starters.  They will be running in their first race in Tombstone October 10th and are suppose to run Leroy and Jackson.  This is a picture of Wendy and Jackson this morning. 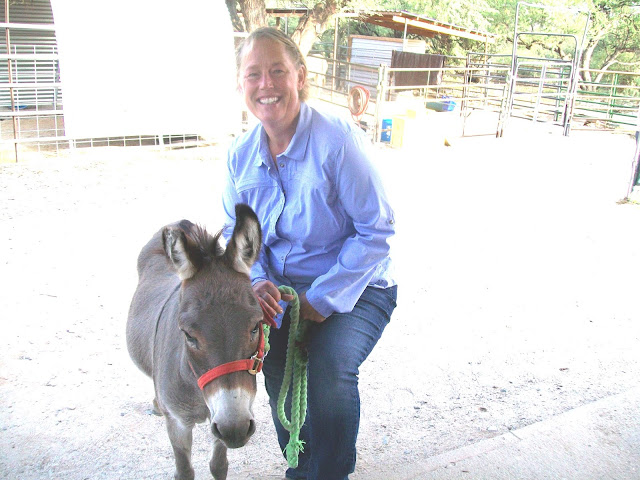 They went out before helping with chores and the boys weren't the least bit interested in running.  They were more interested in trying to sneak mesquite beans along the road.  Gary is a runner and hopefully will have a chance to work with Lynn and Linda when they get back to see if the boys will run.  If not they'll have to find another donkey for him.  Wendy said she is satisfied to just walk.  That would be about my speed too........LOL

We also have an 11 year old girl that just recently moved to the neighborhood that is coming every morning to help.  She's really good help, unfortunately she is starting back to school next week, but still wants to come after school.  So far she's help feed, picked up poo, helped weigh hay and drove the golf cart.  Pretty much takes care of everything she'll need to know.

We're still letting the donkeys go over to Burro Barracks, half one day and the other half the next day.  They really look forward to us coming in with a halter and get all excited.  You'd think we were taking them somewhere special, I guess they enjoy the change of scenery, there isn't much left in the barracks to eat.  They took care of that the first couple of days.  They do enjoy being able to scratch on some of the limbs though and getting to roll in the soft dirt.

Kachina and Anazazi are gate crashers.  That means they like to RUSH thru the gate when you open it, as you're trying to hang onto the lead rope.  I don't like that type of behavior.  So tonight we had them, Big Gus and Bunny to contend with.  Lynn built 4 small pens in the shelter over there, so we put 3 of them in the pens and instead of taking the 2 girls at the same time, only took Kachina by herself.  Oh! my talk about squalling and bawling from Ana, you would have thought the world was coming to an end.  We also double led, actually both of them.  They started out thinking they were going to be in charge, but we managed to get our point across that they were going to behave like ladies.  They both did very well after the rules were understood.  They'll learn, it might take a couple of times before they figure out being led out of a gate isn't a timed event.

Bunny was a good girl, no problem, Big Gus.......!!!!  Big Gus has no filter when it comes to behavior and he was sure we were going to leave him there I guess.  He pawed and stuck his big head thru the corral panels and moaned and groaned and in general was about as obnoxious as he could be.  I thought we might have to double lead him, but once I took him out of the little pen and let him know I wasn't happy with his behavior he settled down and was a good boy......for him......!! Our expectations for him having manners and going along with what you want him to do, are pretty low.  LOL

These are a couple of pictures Linda shared from Colorado. 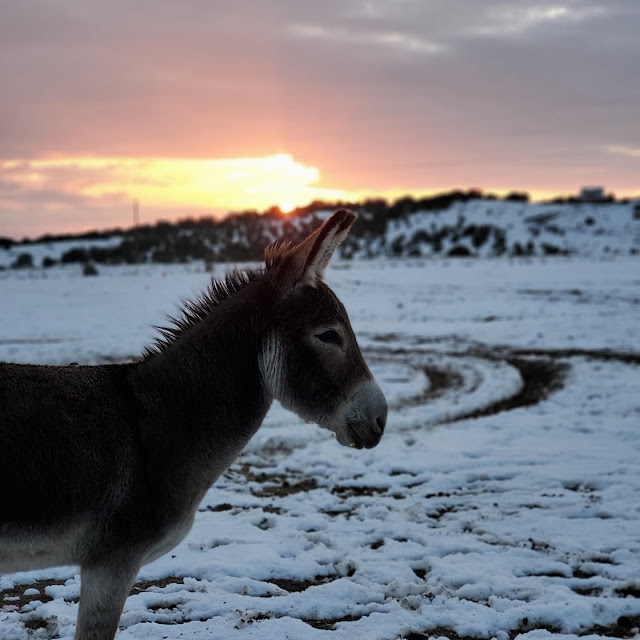 Sunrise,  the snow is an added touch.  Looks cold, doesn't it? 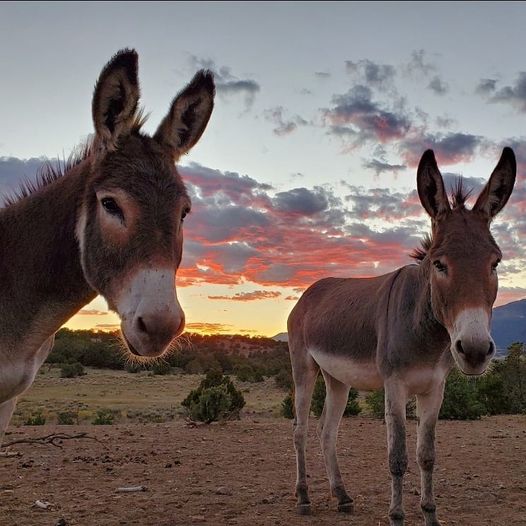