I THINK THE WEATHER HAS FINALLY CHANGED

We've had quite a few false starts but the last few days had highs in the 90s and this morning it was downright chilly.  It's about 1:30 pm and it hasn't made it to 90* yet.  Probably will gain a couple of degrees, but it sure is a lot nicer than most of the summer was.

We even got a afternoon thunderstorm a couple of days ago.  John said we got 0.63 inches which is the most at one time for this summer.  The wash actually trickled a little bit.  This is the 2 summer the wash hasn't ran, Suzanne hasn't had a chance to see it run bank to bank yet.  Unfortunately she probably won't get a chance to see it this year, it's getting late in the monsoon.  The "experts" say the monsoon ends Sept 15th. 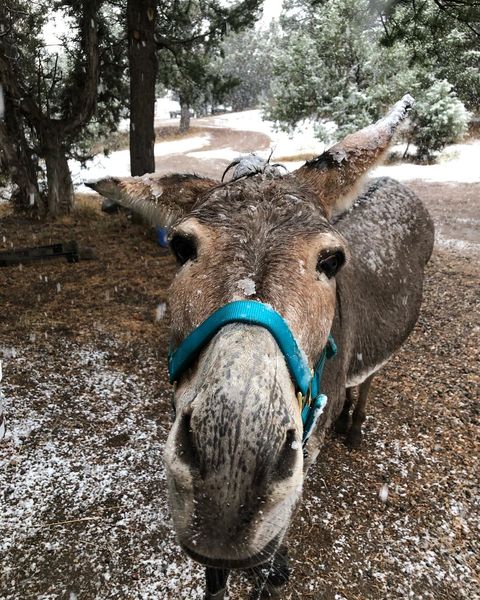 Colorado got their first snow a couple of days ago.  Stacey took this picture of Miss Nell, she looks like she's begging Stacey to "fix" it.  I doubt that she had ever seen snow before, she's lived most of her life almost to the Mexican border south of us.

Linda shared a video of almost the whole herd enjoying the cooler weather up there.  I say most, I don't see Quilla, if it was feeding time he was probably eating, he gets fed by himself, so he misses out on the group videos sometimes.

The gang enjoying the change in the weather

The herd here has figured out the routine for going over to the Burro Barracks.  Although they haven't quite figured out that they only get to go every other day, unless something happens and no one gets to go.  So when it's time to get out the halters and leads, EVERYBODY gets excited.  We try to explain that if you went yesterday you aren't going today, but they don't seem to understand.

The only one that doesn't have to wait is Casper the little white mini mule.  He gets to go into the dog pen every day, because he's the only one going in.  He's eaten everything edible, not interested in the straw in the dog house after the first couple of days, so he just stands around in the shade.  He gets excited like the others when he sees us getting out the leads, even though there's nothing going on in the pen.

Here's a picture of Macho's leg I took this morning.  It probably doesn't look much different, than the last picture I shared, but I notice a difference.  Now that I look at it, it actually looks worse.  But that grey area is breaking down, that is actually proud flesh, which is what I'm trying to get rid of. 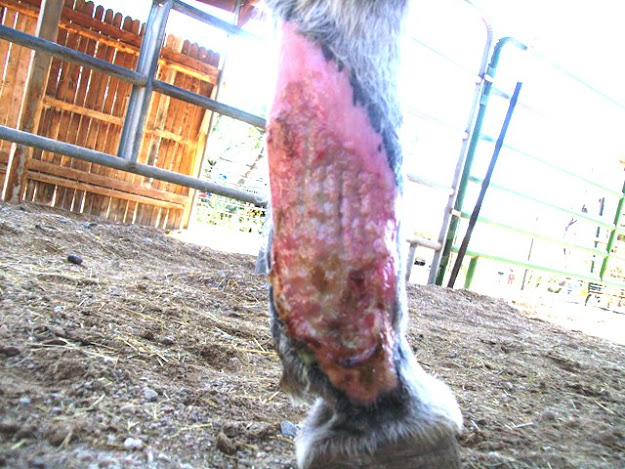 This morning John came in and said his plans for tomorrow had changed.  I asked why and went out to take a picture of what Koshare', Kachina, and Ana had been up to in Kachina's pen.  At night they are all out together in the pens on the east side. 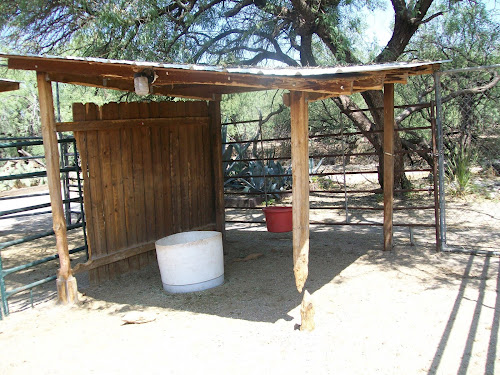 You will notice the roof is sagging.  The reason the roof is sagging is you might also notice the upright post on the right is no longer one piece.  Actually the one on the left isn't very much better, they'll have it chewed in pieces very soon.  So instead of bringing in some gravel to fill in the low spots the rain brought to his attention he will be putting in a pipe as an upright instead of the tasty wooden ones.

Lynn has replaced quite a few of the uprights in the pens in the last couple of years.  I have no doubt eventually all of the wooden ones will have to be replaced.  This year the boards that make the walls in the shelters have suffered because of them being in the pens so much this summer.  John is talking about replacing the wood that needs to be replace with metal.  Years ago that's what they did in Rosie, the beaver's pen, her shelter is all metal.  But the metal isn't as pretty and I'm sure it's hotter than the wood.  But the metal isn't tasty so it's a trade off........LOL

Last night just as we went to bed, coyotes started howling and it sounded like they were just west of the house or even right below the pens on the west side.  We usually don't see or hear coyotes on the property, they don't like to be around the donkeys and when the donkeys are loose on the property, I guess the coyotes just find someplace else that's more coyote friendly.

John yelled a couple of times and we didn't hear anymore from them.  They must have been really close .