BUSY WEEK-END HERE AND IN COLORADO

I think they had more fun in Colorado than John and I had here, and actually were probably busier.  They all went to a race in Federick, CO with 6 donkeys.  Our highest finisher was Cochise with a 6th place finish. 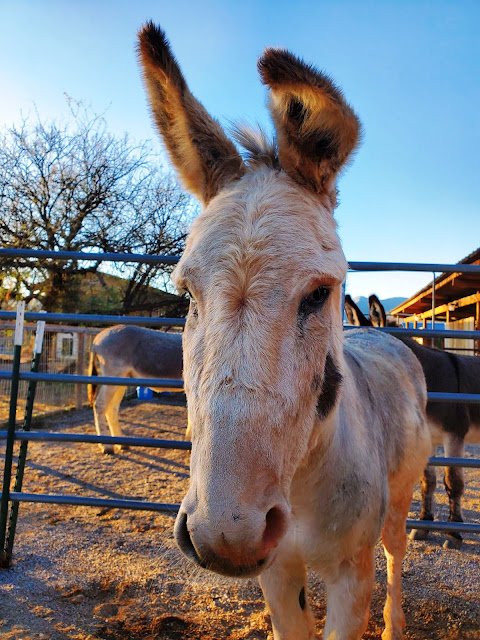 This picture was taken before he left for Colorado this summer and shows his "roping" ear.  Sometimes the rope catches their  ear, damages the cartilage and causes a floppy ear.  In the pictures from this summer, it looks like his ear is standing up more than it was. Even if it is, it probably won't ever be as strong as the other one.  Makes it a little easier to pick him out of the "herd" when we watch videos of the races............sometimes.  Usually it's such a gaggle of burros, people, lead ropes and mayhem, you can't tell what's going on, it's a mixture of color and motion.
This was a race this summer when he and Amber Wann made it to the top of Mosquito Pass, which is over 13,000 feet.
This video was the Frederick race last week-end.  Cochise, Muzzy, Misty, Jacque, Loki and Leo are in that mess somewhere.   The only one John and I have been able to find is Muzzy.  That's only because we were told Lynn was wearing black and they were close to the front on the start.  Muzzy and Lynn finished 9th, which is pretty good, 70 teams of burros/person started the race.
https://www.facebook.com/eric.lynn2/videos/3633688196641809/
Cochise had been a roping donkey and his feet look like they were never taken care of and have grown in ways that would lead you to believe running wouldn't be his thing.  But he loves to run and is such a happy little guy, he's really gotten into this racing business.
Our week-end in Arizona wasn't quite as exciting.  With Suzanne gone to Colorado it's just John and I doing chores and it is really hard to get the donkeys to understand that it's going to take longer for their "meals" to be served.  Or in the case of us going racing Saturday night, Their evening feeding occurred at 2pm rather that the normal 5pm.
They were very excited to get fed at 2pm, and I'm glad we weren't here at 5pm when they didn't get fed.  I would imagine they had forgotten being fed early.  John had given them extra barley straw to munch on and most of them did eat it, but I'm sure it isn't the same, as far as they are concerned.
Our races are usually on an asphalt 3/8s mile circle track.  Our car count has been going down, so that we're lucky to have 6 cars in the field.  Someone got the brilliant idea to run a chicane race to add excitement.  That means they put barriers on the track for us to not hit while we race.  They had one a year or so ago and I wasn't impressed, although I did finish the race, which is better than I did Saturday night........LOL
We actually started 10 cars, and they started us side by side, which means you are contending with with the barriers, while trying to not squash the guy next to you.  Also hoping he will be kind and gentle, until we can get away from each other.  The guy I was starting beside has totaled 2 of my cars over the years, so I was on my own as far as kind and gentle........LOL
The first barrier was between the 4th turn and the flagman in the middle of the front straightaway and that's as far as I got.  They had put a tire painted white on the track to protect their barriers. I knew it was there we ran around for 2 or 3 laps before the race started so we would know where they were.  But I didn't miss it.........can you imagine how high you can go in the air, when you run over a large tire........LOL  Pretty high, the guy behind me said he saw the complete underneath of my car and thought I was going to roll over the hood frontwards.  Glad I didn't do that.  Came down, car was moving forward, I actually thought I had escaped retribution, until I turned the steering wheel and the spindle, that is a really important part of the suspension, wasn't doing it's job, so I wobbled into the infield. So far John thinks that's all that's broke, so I was really lucky.
It was a pretty rough race, 10 cars started, 4 cars finished and 2 of the cars that didn't finished looked pretty tore up.  We only have 2 more races this season, I doubt it anyone is going to put a lot of effort into fixing their cars.  I'll probably drop to 4th for end of the year, the 3 guys in front of me all finished 1,2,3 so there wouldn't be much incentive to fix up a car that doesn't have a chance of finishing well.
We've been told the Hornets will not be racing at that track next year, hopefully the dirt track will open up again, or I guess I'll be retiring although I'm not ready to do that yet.

What a good post, enjoyed the video and all the donkeys running around. Sorry about the races, next year will be better I think.

Not if the track doesn't run our class, that's why I have my fingers crossed for the dirt track opening. I'm too old to wait around for the class to start up again and I really don't care for asphalt anyway. I'm a "dirty" girl......LOL

Ha Ha, I hear you. We used to have at our county fair in Ohio a daredevil car program, it was Joey Chitwood I think, maybe Cheatwood. I don't remember. Our son was young and loved the show all but the clown that looked like he was going to be run over all through the program.