I was shocked this morning when I checked on the blog and saw it had been a week since I updated.  It's not that nothing is happening, that's for sure.......!!! LOL

John and I went out for practice on the asphalt last weekend as planned and it went well.  At least I guess it did.  I am one of those drivers that for the life of me can't "race" without other cars on the track.  When we have to time for our starting position I usually start in the back, because I'm so slow.  I would imagine most people think I'm sand bagging to get a good starting position, but one doesn't have anything to do with the other.

It had a water leak, so we brought the car home and John fixed it.  At least I hope he did.  We took it out on the road and ran it till it warmed up and, NO LEAK.......!!!  We heading up to Canyon Speedway tomorrow to run on the dirt Saturday night.  They have a practice Friday night, I want to participate in. It's been 4 years since I ran dirt, except for one race at the defunct dirt track in Tucson in January 2017, so I'm probably a little rusty.  Driving dirt is a lot different than driving asphalt, I think it is more technical, although a lot of people think racers stay on dirt because they can't do well on asphalt.  Most dirt driver's stay on dirt because it's more fun.....!!!  LOL

Hope I bring it home in one piece, or John will have a fit, since if I break it he has to fix it.  Some of our driver's have been up there and they said the guys up there don't mind contact, so it might be pretty exciting.    LOL

We are still trying to figure out which donkeys are going to the St. Patrick's Day parade in Tombstone the 17th of March.  So far BlackJack, Quilla, and Turbo have been chosen.  Dave and Georgette are coming out Thursday to plan our parade involvement, so we'll chose the other 3 then.  I'd really like to take one that hasn't been to a parade, but, it's too easy to go with the ones that have.  I've been thinking about Buddy Brat.  He's been up to Gammon's Gulch, as a movie extra, so he might be a good candidate.  We'll see.....!!!

We have a family of skunks that come every night for the cat food on the back porch.  We think there is 3 of them, the reason we think it's a family is they don't squabble with each other. 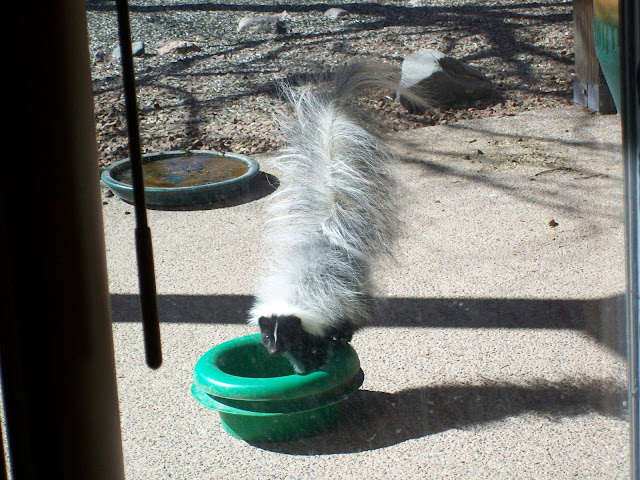 These desert skunks are all tail.  The little skunk probably doesn't weigh 2 pounds, but has a tail that's about 2 feet long.  I guess it used to make him look bigger.  When he buries his head in the feed dish, the tail sticks straight up in the air, like a big flag.

Do you hear from the man that got Casper? How is he doing and has he settled with his new family.

I've heard from him a few times, he has worked with Casper a little bit, mostly getting to know him, I don't think a cart has been added to the program yet. It sounds like he's doing good.