Everyone has favorite food list and one of the goodies at the top of my list is avocados.....!!!  I've always said the perfect place to live would be a place you could have citrus, mango and avocado trees in your yard.  Years ago we lived in California for a little while and the house we rented had one of each,  grapefruit, navel orange and lemon trees in the yard.  They were so good and it was such fun to go out and grab an orange off the tree, or have fresh grapefruit for breakfast.

Anyway Doug had been in California for about a month.  He was out there earlier this year and visited with a friend that has avocado trees in his yard.  At that time I guess they were not expecting much of a crop this year, weather wise. 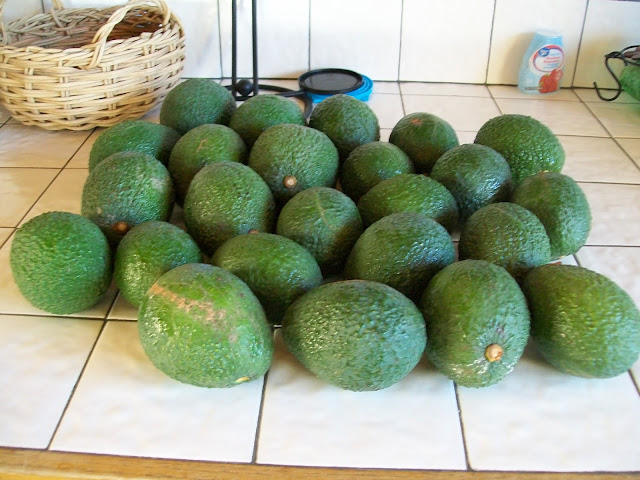 Looks like after a lousy start to the season, they really got with the program and grew some really nice avocados.  I'll share when Lynn gets back, he likes them, Linda.......not so much, I'm sure her share will get eaten.......!!!  LOL

During WWII my grandparents, great grandparents, uncles etc, all headed for Portland Oregon to work in the shipyards, like a bunch of Okies.  Well actually this side of the family was from Kansas/Missouri mostly......!!!  Anyway they got out there, everybody old enough to work, got a job building ships and Mother and I at the tender age of a year ended up out there with them for awhile.  I don't know if they had ever seen an avocado coming from the Midwest, but somehow they discovered them.  My grandfather said, the whole bunch decided they liked them, when they found out they cost a dollar apiece.  At that time, a dollar was real money, so he could have been right....!!!  LOL  Anyway it started a "we love avocado" campaign that has lasted all these years, although I'm the only one left that knows how it started.

In the 60's Grandma Bonnie (she was a welder in the shipyard) and I drove down to Florida from Missouri to bring John home from temporary duty at Homestead AFB.  While John worked the last few days of his TDY, grandma and I ran around being tourists in sunny southern Florida in the winter. There were places all along the roads selling all sorts of fruits and vegetables and one thing they were selling that caught our eyes was..........yep.........avocados.....!!!  They weren't the Hass like California has, they didn't have as much oil or flavor, but we weren't that picky, especially when you could buy them 10 for a $1.00.  Grandma rode in the back seat of the Oldsmobile all the way from Florida to Missouri, with a box on either side of her, filled with avocado, 6 dozen to be exact and a banana tree between her legs.  We made fun of her all the way, but we helped eat them when we got home.  When she died in 1972, she still had that banana tree in a large pot, although I don't remember it ever having bananas on it.

Poor Rosie, is still gimping around on 3 legs.  I haven't brought Dr. Jeremy up to date, with the week-end and the holiday, I'm sure he's got enough other calls to keep up with, since there is very little you can do for an abscess except "observe" it anyway.  I'm not a fan of soaking a foot to hopefully get the abscess to pop, although if she was a little more cooperative I might have tried it.  Rosie is one of the most reactive donkeys we've ever had, it's nothing to see the whites of her eyes on a regular basis.  She seems to think if you want to do something with her, it's going to be "horrible" and she wants no part of it.

I got a call yesterday that will probably raise our donkey count by one, a 31 year old gelding named Poco.  His mom is 87 years old and says it's getting too difficult for her to take care of him.  He's actually been by himself donkey wise for about 19 years.  I guess she got him as a companion for a horse and sold the horse.

Our problem right now is, we don't have an empty pen, nor do we have corral panels to make another pen.  We've been trying to find some used corral panels with no luck.  And a problem with used ones is they end up being rusted, bent with broken welds etc.  So I guess I'm going to bite the bullet and buy some new ones.  There's a place in Texas that runs a circuit throughout the southwest delivering panels and gates along their route.  I'll get in touch with them this week and see when they are coming thru our area again.  Then we'll have to figure out where to put another pen.

I hope everyone has a very Merry Christmas tomorrow, I'm going to do something I haven't done for a long time, actually cook a turkey with all the fixings.  John will be thrilled, he doesn't mind going out to eat, except there aren't any leftovers and I think that is his favorite part of the meal and they also never bring him a drumstick to gnaw on.......!!!   LOL

Merry Christmas to you too!

My daughter has an avocado tree, last year it was bending down with fruit, this year a dozen or so. Plenty of tomatoes and strawberries this year ripe now.