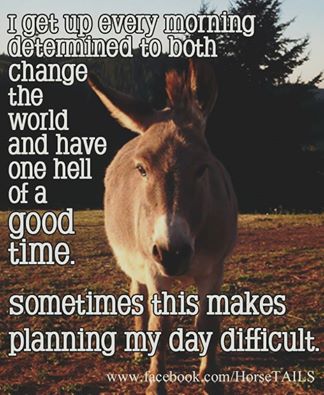 Actually I'm sure the donkeys are enjoying the colder weather.  The equine comfort zone is between 40-80 degrees and with the thick winter coat they've put on I'm sure being in the teens for a few hours before sunrise isn't that much of a problem.  Worth the trade-off to get rid of the flies and the warm temperatures that cause so many skin problems.

The little bark lizard went into the hay barn in a bucket filled with hay, wrapped in a kleenex.  Well I tried to wrap him, BUT, even though they are comatose, if you try to pick them up, they get real lively, real quick.  So he and the kleenex are together buried in hay in a bucket.  That's the best I could do.........LOL

Tours are picking up now that it's not so hot and the "snowbirds" are showing up for the winter.  We've been doing more tours with the donkeys out of their pens lately, and they've gone really well.  Seems to be enjoyable both for the people and the donkeys, getting up close and personal.  We don't feed when they are out like that, don't want someone to get knocked down, when 2 donkeys are trying for the same treat.  They wouldn't knock someone down on purpose, BUT, food adds a whole new dimension to the adventure.  I don't even want to go there.  We still do tours with the donkeys in the pens, usually if the people want to come in the morning, we'll leave the donkeys in.  Actually lately when they make the appointment, I usually ask them what they prefer and most people want the donkeys out and about..........!!

Leddy, Lynn and Linda's Colorado donkey, is fitting right in the herd.  He still hasn't found a running buddy, but he has discovered girls.  A few days ago, Lynn one of the minis was trying to entice him into a "relationship".  She's less than 36 inches tall, he is a large standard, probably over a foot taller than she is............soooo...........no go.

The last couple of days all the boys are trailing Tula, including Justin, who is also less than 36 inches tall.........!!  Leddy is right in the middle of the party, participating whenever he gets a chance.  Needless to say, territory is important, and being at the front of the line is vital.  He's not a fighter, but neither are Boaz, Quilla, BlackJack and of course the wishful thinking Justin, so there's a lot of pushing, shoving and growling.  You can almost see Tula rolling her eyes as she tries to escape in disgust.  Gelding them, besides making them shoot blanks,  seems to disrupt the mental process of breeding.  They will squabble to the front of the line, get in position and then it's more or less a sight seeing operation.  They kinda look around like, "what do I do now?".  LOL