I know that might not sound very exciting to you and I, BUT, it sure is keeping the donkeys busy.  Of course the leaves are done for the season, we've had enough wind to cause them to drop in great numbers.  Thankfully mesquite leaves are pretty small, so even though the ground is covered under the trees, it takes them a long time to pick up enough to make a mouthful.  It does keep them busy all day between breakfast and supper, which is a good thing.  I don't know if anyone has ever tested dry mesquite leaves for food value i.e. sugar and starch, but I'm pretty sure they aren't really bad.

Just heard of another good friend passing away.  Laura had gotten in touch with us years ago, when her jenny was attacked by a mountain lion down by Gleeson.  The jenny unfortunately died and Laura was looking for a companion for her donkey Tio.  We found a friend for him and life was good up until a couple of years ago, when Jacko had to be put down.  We had a nice jenny that went to live with Tio.  Laura went thru some tough times, but her dogs and donkeys were always her main objective.  We hadn't been in touch for about a year, you know the old saying, if you're good friends, you can pick up where you left off, no matter how much time has passed.  Yesterday was her birthday and I was thinking of sending her a Facebook message, when I got a call from her pastor, that she had died.  She had been sick for about a year and had given him a list of people to notify.  I asked about her donkeys because of course we would take them, but he said some friends wanted to keep them.  I'm sure if Laura approved of their new home, it will be a good one. 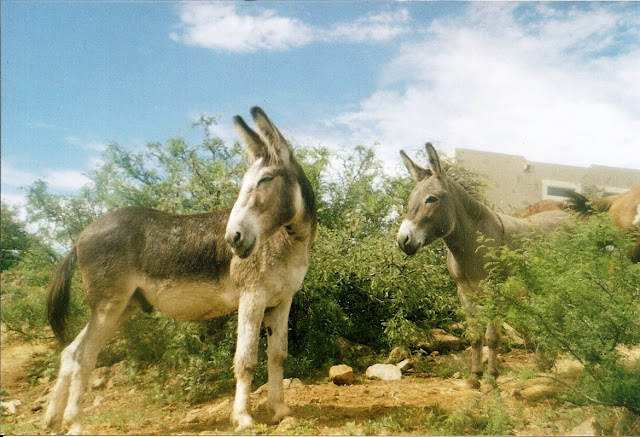 Great advertisement for the rescue and he looks so dapper in the new blanket.

We've already put it away, along with a wreath with gold flower on it, for the future, in case someone asks us to show up.........LOL