Well today was a lot of fun.  Dr. Jeremy came out to see why Penny's mouth was smelly again.  She had a smelly mouth when she went up to the clinic in Gilbert, and when they did the colic surgery, Dr. Voss prowled around in her mouth and pulled an infected tooth.

John told me a few days ago her mouth was stinking again, so I called for an appointment.  In the meantime Dr. Jeremy had me start her on antibiotics twice a day.  Let me say working with Penny is NOT easy.  She will hurt you if she can, however she can, front feet, back feet, using her head as a battering ram.  So in order to get 8 ground up pills down her throat, we put her in the squeeze and then try to line up a syringe and plunge the molasses and pills in before she explodes.  The 1st time isn't too bad, by the 2nd time she's figured out some evasive actions to try, and by the 3rd time she's really thought up some new ideas...........LOL  I'm not sure, but think she cracked my wrist yesterday morning.  I've got it wrapped, which is probably what the doctor would do, so I'll save the time and effort.  We decided to try and see if we could get them down her one at a time, with animal cracker pieces.  I tried last night and after 6 she said no.  But this morning she took all 8 for John.  Her mouth is already smelling much better, but I still wanted her looked at. 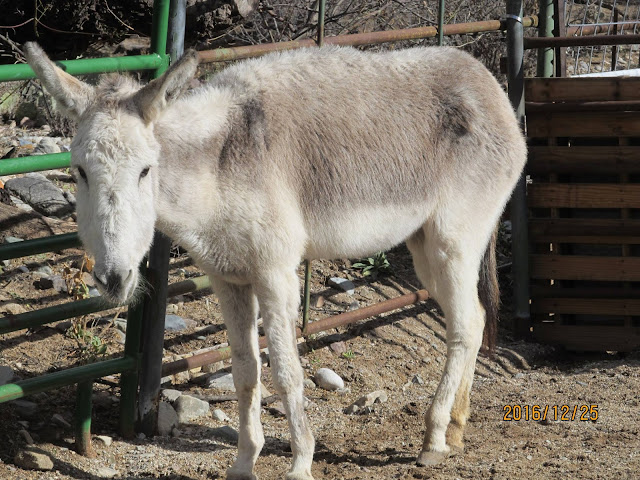 We warned Dr. Jeremy, got her into the squeeze and he decided to just drug her, rather than try to work with her.  Good idea, except she is still difficult.  They were doing pretty good, with her drugged and him running his hands around inside her mouth.  Until she crunched down on a finger, a bloody finger by the time he got it away from her.  Good news, it isn't broken.............LOL  I think that's our 1st wounded vet over the years, which is pretty good, although I'm sure he didn't appreciate being the 1st one.

Good news, he didn't find any really loose teeth, or any cracked ones.  Her jaw has been broken, so her teeth aren't really lined like they should be and are crooked.  She packs food around them, so hopefully if it's anything other than just rotting feed, hopefully the antibiotics will take care of it.  He said if it happens again, he'll put her completely out and x-ray her jaws, so we have a better idea what we are messing with.  Hopefully that won't be necessary, but if it is, at least he has an idea of what direction to go.

As usual, as the days pass and the the year's come to an end, there are changes, some good and some not so good.  But that is part of life and every day should be seen as a gift.  Many people complain about getting old, but think of the many people in your life, that didn't have the privilege of a long life.

Seems like this year we've lost many friends and relatives, and the vast majority weren't "old".  I know it's part of the kaleidoscope of life, people are lost and people are added.  Just lost a good friend from the race track a couple of days ago.  Don and his brother Allen drove one of the push trucks at the dirt track and moved over to the asphalt when the dirt track closed.  I'd either wander over to their truck or they would drive where I was, and we'd talk for a few minutes.  Nothing earth shattering, they just liked to be involved in racing and always liked to talk and seemed to enjoy watching me race.

Don had been sick for quite sometime and hadn't been able to come out to the track.  I'd ask Allen about him, and he'd just shake his head.  Sixty years old isn't very old, although as they say, "the good die young" and he was a very good man.

I hope everyone had a wonderful Christmas and that 2017 is a great year for health and happiness.
Posted by Tish at 12:44 PM

My husband was 69 years old when he died. A young man by today's standards. He was one of six kids and probably the best of the six. The others are going strong and living in ways you wonder how they survived. I guess God takes the best sometimes.