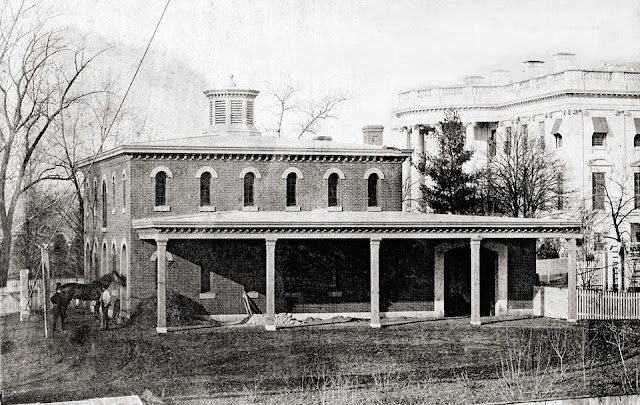 This is a photo of the White House stables that were built in 1857 and burned in 1864, tragically killing several of Lincoln family's horses and ponies. Following is an account provided by White House guard, Robert W. McBride.

"One night there was an alarm of fire. The White House stables were burning. Those of us who were early on the ground saw a tall and hatless man come running from the direction of the White House. When he reached the boxwood hedge that served as an enclosure to the stables he sprang over it like a deer. As he approached the stable he inquired if the horses had been taken out. On learning that they had not, he asked impatiently why they had not, and with his own hands burst open the stable door. A glance within showed that the whole interior of the stable was in flames, and that the rescue of the horses was impossible. Notwithstanding this, he would apparently have rushed in had not those standing around caught and restrained him. It suddenly occurred to someone that possibly the stables had been fired for the purpose of bringing him out of the White House and giving an opportunity to assassinate him. Captain Bennett, of the Union Light Guard, and some others immediately hurried him into the White House, while, by Captain Bennett's orders, with a detail of the men of our company, I took charge of the entrance, remaining there on duty for several hours. "
* * * * *
The donkeys are very happy to be back on schedule, as far as Burroland is concerned.  After about a week of restricting their time over there, they had pretty much cleaned up most of the beans, so the gate is now open 24/7 and the only time they aren't over there is when they are in their pens eating hay.  We knew it was time, when they started coming over without having to be chased.
Ruthie, Wister and  Boaz fell right back into the routine, like they had never left.  I have noticed one difference, Wister seems to be officially weaned, although he still tries occasionally.  When he tries to nurse and there's nothing there, he kicks back at Ruthie with his hind foot, like it's her fault.
Boaz also came back with some more proud flesh growth on his knee.  Sigh!  I guess that is always going to be problem for him.  I'm debating having it taken off again or just controlling it as it is.  I'll work with it for awhile and see how it goes.
Everyone else is doing good as far as doctoring is concerned.  Pepper hasn't been down on his right side for quite awhile.  John saw him lay down yesterday on his left side and dust bathe.  So hopefully he'd gained enough strength in his right rear leg to be able to control which side goes down first.

Yesterday I worked with Penny and picking up her feet again.  She is so sweet and really seems to want to meet you half way.  I picked up all 4 feet, even used a hoof pick on a couple of them.  The left side seems to be OK, she still has reservations about the right, front and rear.  But she didn't pull away or kick or anything like that, she was just reluctant to pick those 2 feet up.  Once they were up, she let me hold them until I decided to put them down.  Of course I didn't hold them very long, but I thought she did really good.