MISS PENNY PACKER IS SO BRAVE 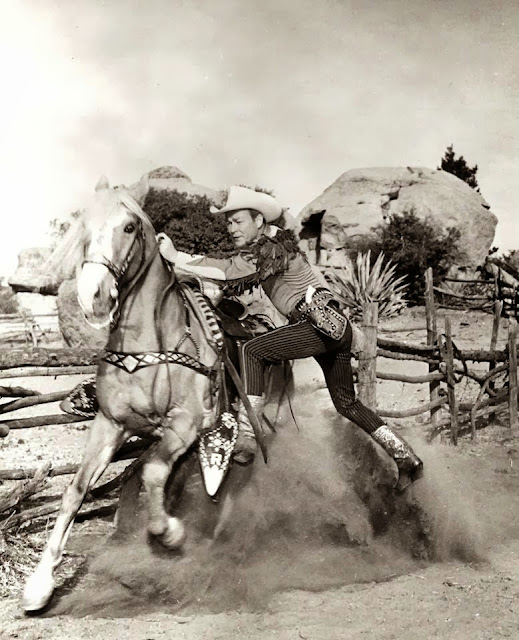 No explanation needed, I hope....!!!  Spent a lot of my childhood watching Roy Rogers and Trigger, catch the bad guys.....!!!

This morning when we were doctoring I decided it was time to work with Penny on picking up her feet.  Although at first she was a fear kicker, she's really been good lately, no kicking.  Of course we haven't ask anything of her except to try to stand still, when I need to wrap her legs.

Mark Myers from Peaceful Valley Donkey Rescue, the largest donkey rescue in the U.S. has recently put some "how to" videos on You-Tube.  One of the first ones he put up was how to pick up hooves on a reluctant donkey.  After watching it a couple of times I decided to try it with Penny.  It isn't anything dramatic, just put a rope below the fetlock and get them to raise the foot off the ground without having a hissy fit.

Penny isn't a fan of halters and ropes, so we had to put her into the "redneck" squeeze to put a halter on her.  Then we tied her up short, and John stayed in position to feed animal crackers as needed.  She didn't seem to mind being tied all that much, which was a surprise as evasive as she is about ropes and such.

The more I work with her the more I am sure her front legs have been roped.  I started with a front foot.  When I pulled up on the rope, she almost collapsed on the ground, I think she would have hit the ground, except I was in the way and she was leaning on me.  Back legs no problem, in fact she even let me pick them up by hand, not using the rope.  Other front leg, same scenario, almost collapse.  I did manage to get each one up for a second or two.

The best thing out of the whole experience is, she never offered to kick at all.  Hopefully if we keep working with her we can get her desensitized enough that Courtney can trim her feet.  Because of her hunch back I guess, her rear feet grow pretty weird.

We have a routine I guess.  In the morning when they go out of their pens, they head for the Burroland gate to wait as long as necessary.  They see John coming and they start milling around, trying to get the best position to get in there as soon as possible.  John opens the gate, and they disappear.  They are much easier to round up in the afternoon, although we still have to go over to get them, rather than they coming over on their own, which is how it's suppose to work.  John rings the bell before he goes over to find them, with the idea that they will hear it and come on over.  So far that hasn't happened.
Posted by Tish at 2:44 PM

Its probably like the poor goats at a goat tying - they hear the horse coming and they lie down with their legs in the air.

Whatever it is, I don't have "loving" thoughts about some cowboys and haven't for quite some time. The idea of people causing such mental anguish, not to mention permanent physical damage is so wrong.