The hay truck got here an hour early this morning which makes for a panic attack, since we were still involved in morning chores.  But it worked out OK, well except for the 1st squeeze of 62-64 bales coming apart & having to be restacked, so the squeeze could pick it all up at once.  The other 7 stayed together & it really didn't take the guys too long to get it all in the barn, safe & sound.

Of course all this time the donkeys were watching all that was going on & letting us know if they were out, they could help with the hay.

They got to go out as soon as the hay barn was secured.  Of course there was hay everywhere up & down the driveway, which kept them busy, once the mesquite branches were picked clean.  John had to do some trimming along the driveway, so the big truck could get thru without picking up a lot of "Arizona pinstriping". 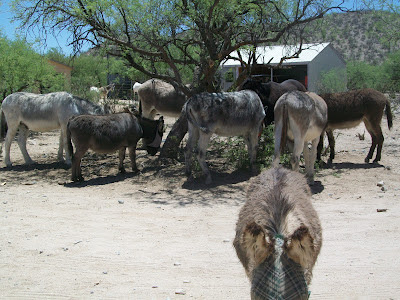 Tucker had to leave the mesquite eating "party" to visit with me.  I didn't realize he was in the picture when I was taking it or I would have made him "prettier".   He just looks like a little blob.

Simmons & Pancho got to go out for the 1st time today.  I figured with all the excitement going on, if anyone did want to act silly, they'd be too busy to pay attention to the new guys.  I forgot about Jenny & Tula.  Jenny is a rather casual "slut".  If they are in the neighborhood, she'll do her dance for awhile.  Then she wanders off.  Tula seemed to keep Simmons attention most of the day, along with BlackJack, Boaz & Buddy Brat.  Silly boys........at least they weren't doing anything except squabbling amongst themselves for the most part & trailing behind Tula just in case.

When it was time to go into their pens tonight, Pancho went in like he knew what he was doing.  Simmons had no clue where to go,  except to stay with Tula.  Tula will NOT go into her pen if someone is following her.  Simmons was like glue, which really irritated her, which really irritated us, since they were the last two out.  It took both of us to finally get him separated & headed away from her long enough, for her to run in her pen.  Then he went in his pen like a good boy.


Got Mocha & Tucker's health certificates today, so they are good to go to their new home in Las Cruces.  The plan is we will feed early Thursday afternoon & hopefully get on the road by 4pm.  It will be cooler than hauling them during the day.   If everything goes OK, we should get home about 1am.  Like John says , it will be like when we go to the races, although it's usually a lot later than 1am by the time we "drag" in.  Have to go eat & do some "bench racing", so even if the races get over at a decent time, we still drag in late.
Posted by Tish at 8:40 PM

Tucker is a cute little blob though, Tish!

Of course he is, see you tomorrow.