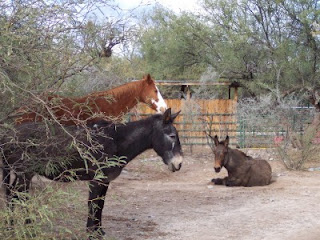 This is the "horsey" group, although Max the horse is outnumbered 2 to 1............!!!! Jack is in the foreground & "The Unsinkable Molly Brown" is laying down resting in the afternoon sun. She's lucky to have sun, the last few days have been pretty cool & dreary around here.

John brought Zorro, the black cat home yesterday. So far he's spent most of his time on top of the cabinet in the pantry, although he will come down if we call him. He's very mellow & people friendly, loves to be petted. Unfortunately Midas hasn't been a very good welcoming committee. I'm really surprised, he's also very mellow. It might take a couple of days, but I'm sure they will become "buds". He sneaked up on John's lap, while Midas was outside this morning............!!!!!

Chester's leg is swollen, but it's still draining. Dr. Taylor said it needed to drain for 2 weeks, which will be Tuesday. I so want him to be OK, even if the odds are against him. He deserves to have a good healthy life, & we'll do all we can to make that happen.

Tula, our wild child has upped the ante' in her relationship with us & the other donkeys again. She's decided that she isn't going to come in to eat. Unfortunately, some of the others think she's in charge & stay out with her. I spent over an hour yesterday "late" afternoon, rounding up her & her cohart, Molly, the mule. Don't know how far I walked & ran, but am beginning to think, I'm too old for this...........!!!! Ha! It wouldn't have been so bad, but Sugar was walking & running with me, which added another dimension to the whole situation. Nothing like stumbling over one, while trying to chase two......!!!

This morning she was over in Burroland, with her little herd of......... Sugar, Chester, & geriatric Pepper. I don't know how he keeps up with her, but he does. John put a halter on Pepper & I herded the other three. After last night I guess she decided I probably wouldn't give up, so she headed for her pen with Sugar & Chester in tow. With her, we never know what's going to happen.