BELLE IS GOING TO HAVE SURGERY 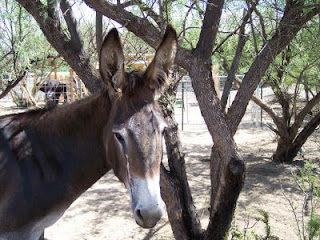 The Vet called about Belle's jaw "rock". We now have a name for it. It is a Sialolith Cyst . A rather unusual occurence according to the Vet. In fact she checked with other Vets & only found one that had seen one.

Foreign matter gets caught in a saliva gland.....maybe a piece of hay. The body reacts & starts coating it with calcium, sorta like a oyster does with a grain of sand to make a pearl. Rather than wait until it becomes a problem for her, we have made an appointment to have it removed in May.

We had some visitors show up today from Glendale. It's spring break, so Grandma was taking her grandkids around & showing them southeast Arizona. They came in & groomed on the donkeys & Max for awhile, & were going to Kartchner Caverns this afternoon. What a wonderful grandma, to spend time with the kids like that.

The rabbits & chickens have settled into their new, hopefully temporary home. One of the rabbits was quite dehydrated yesterday & very lethargic. We gave her some electrolytes last night, & she's running around like the others today. Found out one is a little boy, so he is in a pen by himself, for now. We also went over after dark last night, as planned, & "captured" Mr. High Flyer.
Posted by Tish at 12:06 PM