It's been so hot lately, training is even further down the list than grooming.  Feeding, making sure everyone has fresh water and doctoring gets done, but everything else is pretty much on hold.

I doctor Macho Man every day, but the other 3 have not been worked with or even out of their pens since they got here early in July.  Suzanne finally put a halter on Koshare' yesterday and took him out for a short tour around the driveway and one of the trails.  Even had him load in the trailer.

She said he really did good, he spent most of the time, rubber necking, since he hadn't been out of the pen, everything was new to him and he tried to see it all. 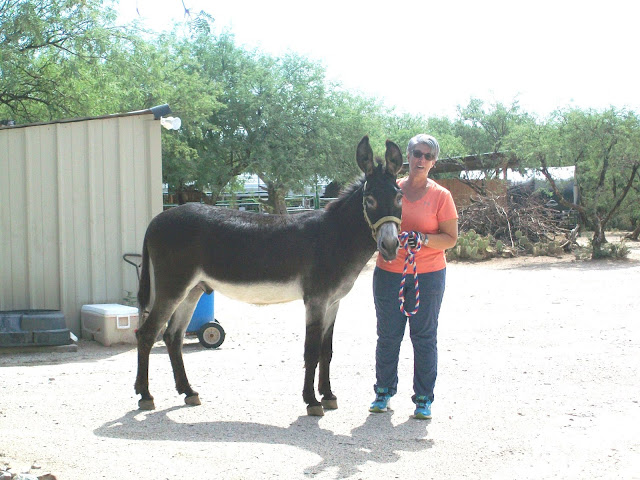 He was more settled this morning, and would have ran if she had let him, so he's probably going to enjoy racing when he gets the chance. 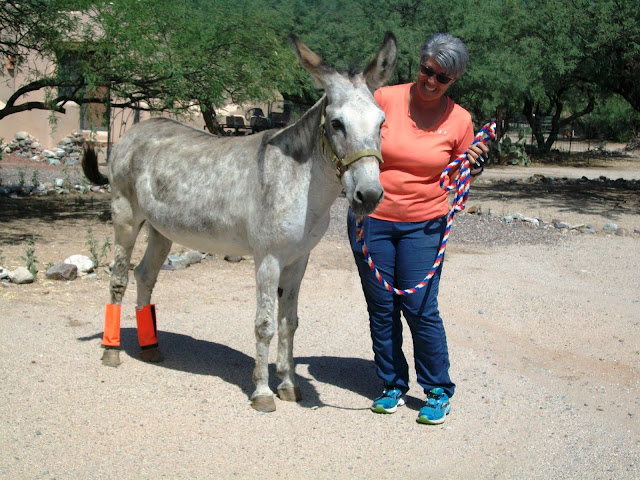 This is Anazazi aka Ana, today was her first time out of the pen.  She is the fast eater in the group.  Once we figured that out, they all eat by themselves now, she is on a diet, and needs to lose a little weight.  She also has fly damage on her legs, her right front is almost bald on the other side.

We've tried boots and different types of  "barriers", the flies love her.  These blue pieces of material, use to be 2 polo wraps before she destroyed them getting them off.  She doesn't seem to mind something on her hind legs, but those front legs are not going to be covered.  Shoo-Flies are the latest rage, very light weight, breathable almost perfect right?  WRONG.......yesterday I put them on all 4 legs. 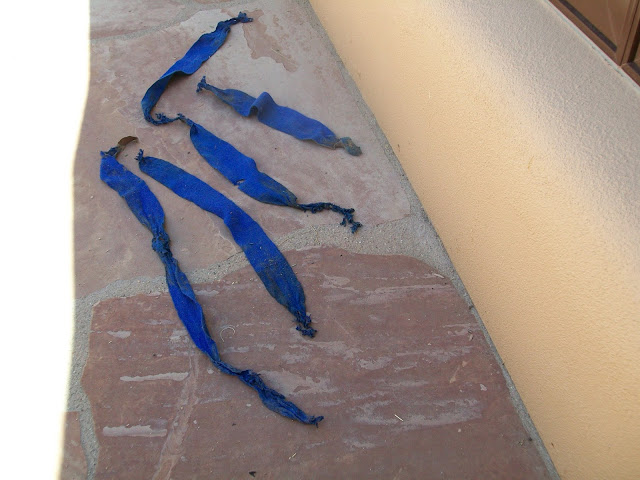 A few minutes later as I was driving around the driveway, I noticed one laying in the pen.  While I was gone, Suzanne and John went out and put it back on her.  She pulled it off and started shaking it in the air.  Then she took it over to Suzanne and dropped it on the ground after Suzanne asked her if she was going to bring it over to her.

Put it back on her, she took it off and took it back over to Suzanne and basically handed it to her.  We've given up.....for now.  She really needs to have that leg covered, but obviously her cooperation level isn't very high...........Sigh...!!

Kachina their mom also went out, but she didn't enjoy the experience.  Suzanne said she is very timid and everything scared her.  She'll probably be better with more outings, but she obviously isn't a "natural" like the other two.

They sure had a audience when they went out.  They had to walk right past Leroy and Jackson's pens.  Suzanne has even taken Casper out a couple of times, but Jackson and Leroy have been out numerous time with a couple that are coming out to volunteer and also learning about running with donkeys.

All 3 of them seemed to think it should be their turn again, standing at the gate, whining as Suzanne and Koshare' or Ana headed down the driveway.

Macho Man's swollen leg is much better, Dr. Jeremy came out and said I probably had gotten the pressure bandage too tight, which is really common if you haven't done it before.  Who knew I would have enough strength to make a bandage too tight.......!!!  LOL 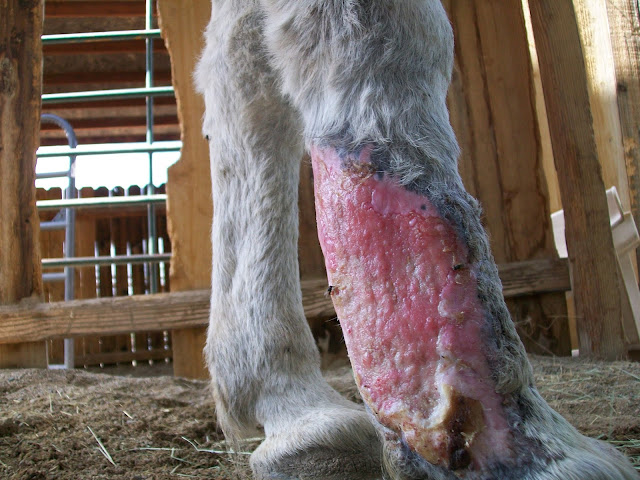 It's got a long way to go, the edges seem to have wider good skin than it did when I started working with it.  This was this morning.