Probably going to be for the foreseeable future.  Heard from hopefully a reliable source that this is the 3rd hottest summer and the 2nd driest summer for this area since 1894.  I don't doubt it, it's really been a long summer.

Heard from Colorado, they raced yesterday from Fairplay to Leadville about 24 miles.  Haven't heard how everyone did, except Sugar got a stone bruise and didn't get to finish the race.  Everyone else finished, just don't know where.

I'm still doctoring Macho and Ana's, legs.  Macho's leg is swollen, so Dr Jeremy said to hose it and see if that helps.  He will try to come out tomorrow if it isn't any better.

Ana is "much" happier with nothing on her front leg except Underwood Horse Medicine.  Throughout her last couple of days of destruction of anything I put on her front legs, she has had fly leggings on both hind legs, which I find funny.  She doesn't seem to mind them at all, I'm sure she could reach them if she wanted to, she seems to be a determined young lady.

This morning John noticed a momma roadrunner sitting on last year's nest in a small mesquite by BlackJack's pen.  Sure is a hot time of year to be sitting on eggs I would think, poor girl.  I guess we have a built in supply of food when they hatch judging from what John caught yesterday. 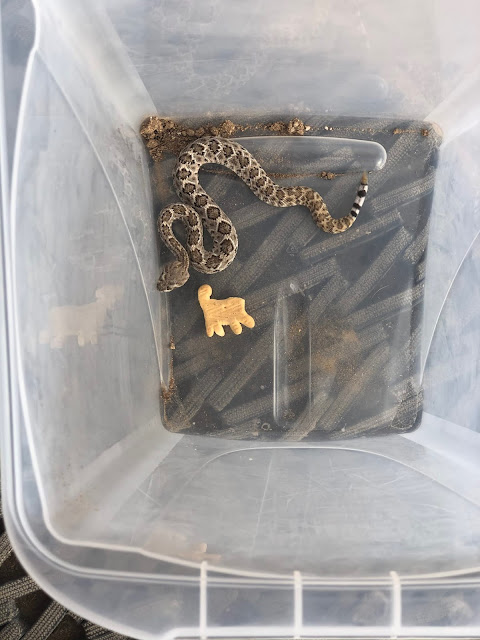 Yesterday afternoon when Suzanne went out to get ready for feeding, when she moved DJ the pony's hay bunk, this little guy was under it.  She said she thought it was a squashed piece of poo at first..........LOL    She came in, got John and his snake catching supplies and the little guy got moved over on Burroland.  We have a no kill policy around here for everything, except roaches and flies.  Scorpions, snakes and all spiders get a pass, when we find them.

There is a pile of limbs close to DJ's pen, we wonder if momma had her babies there.  As you can see he's not very big, they put an animal cracker with him to show how small he is.  Rattlesnakes give birth to about a dozen of the little guys and the mom pretty much sends them out in the world on their own after about a week.  Now we're all on alert for momma and the rest of the kids, so far we haven't seen any of them.

One of the favorite snacks for a roadrunner is snakes, so I would imagine they will lower the population of baby rattlers pretty quick, when the baby roadrunners hatch out.

Stacey in Colorado has been taking more pictures of Miss Nell, the former Jenny she adopted this summer. 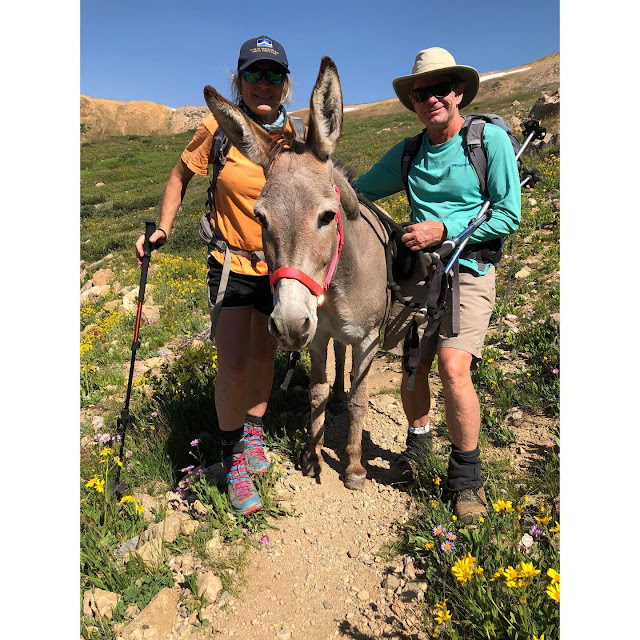 Here is Stacey, Miss Nell and a friend out enjoying the gorgeous scenery and weather they are having up there.  They make quite a team, couldn't ask for a better home for one of our donkeys.

Thanks for sharing such a wonderful picture, Stacey...!!  She looks very happy with her new life.