Well, they headed down the road early this afternoon, after a fun filled couple of hours, getting 28 donkeys and 1 mule into 3 trailers.  I might be wrong on the number, it could be 30.....!! LOL  Some of the donkeys hopped in like it was fun.  Some of them went in after a complete investigation of the situation and showing their reluctance to cooperate.  Some of them had not planned a trip for today and didn't see a need to hop in a trailer, especially if there was already 4 or 5 in there.  Those feet got firmly planted and took a lot of patience to get them in the trailer.

Finally, everyone was where they belong and off they went.  I haven't heard from them yet, Suzanne was going to call when they got to their overnight stop.  But they might be there and putting up the corral panels so the donkeys can get out, roll in the dirt and stretch their legs for the night.

So John and I are in charge until Suzanne gets back in a week or so.   We only have 9 donkeys and Casper the mini mule to take care of.  Feeding went really quick tonight.  We tried to group the remaining donkeys together.  There are 5 jennies, so we put them in  side by side pens. Tula is the head jenny, and she lost her whole herd this morning, they all went to Colorado.   John moved 2 jennies next to her pen.  They probably won't be interested in each other, but you never know. 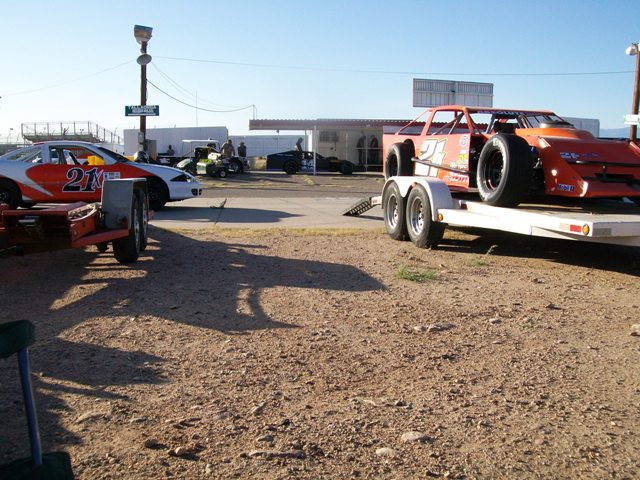 Took this picture at practice last week-end.  Our son Rod's modified is on the right and my Hornet is on the left behind the car trailer.  I'm suppose to race this Saturday night at the asphalt track.  The track marked off the bleachers, so people can't sit next together.  Hopefully they will at least let families sit together.
Posted by Tish at 9:22 PM