BURROLAND IS STILL NOT OPEN FOR DONKEYS

Much to their disgust.  Lynn Linda and Suzanne ran their 26.2 miles marathon down Mt. Lemmon Saturday as planned.  And they all finished, which to  a (not going to do it EVER) non-runner is absolutely amazing.  I do have to say, when they got home Saturday afternoon, they looked pretty rough..........LOL  They also weren't moving very fast and they all disappeared into their RVs for the night.

Next morning I was shocked, Suzanne was in the feed room doing her thing and Linda was moving around like normal putting donkeys in their pens.   Lynn didn't make the morning wake up call, he might have been awake, but he had the wrong shoes for that race and his feet looked like hamburger.  But he made it out for the afternoon feeding.

There are beans over in Burroland, but not a lot, the cows have been over there more than we thought.  So the hold up on them going to Burroland is waiting until Lynn's toes will allow him to chase reluctant donkeys back over here after only a couple of hours.  It usually takes a few days for them to get the hint, and Lynn is usually our star donkey chaser.  John has locked the perimeter gates, so the cows can't get in there anymore, when the time comes all we'll have to do is open the gate to Burroland.  The other day, John went over by the gate and Buddy came running, so they are watching the gate.

Lynn Linda and Suzanne are doing a 12 mile race up in the Phoenix area this week-end with donkeys, hopefully they will all be up to speed.

This is Muzzy that is visiting here for the winter from Colorado.  He's another one with bracelets on his legs, like Legend.  They are both real nice boys and should make good racing donkeys. 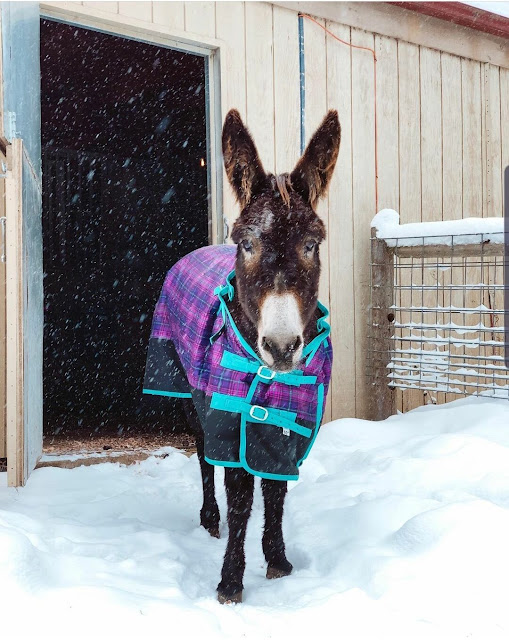 This is Coquette at her new home in Colorado.  I would imagine she's wondering what happened to the weather........!!!  Looks like she's got a nice blanket to help her adjust to the cold.  OBTW she has had a name change.  She is now known as Avery, but she'll always be Coquette to me. 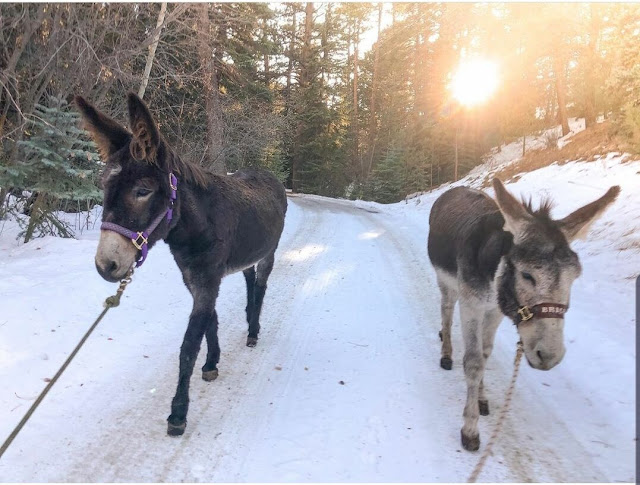 Here she is out for a walk with her new best friend.  Coquette has to bond with someone, she and Penny were inseparable here, Penny could care less, but Coquette insisted on being wherever Penny was.  I'll have to wait until I talk to Linda to share her new friend's name.  I know it starts with a B, but for the life of me I can't remember what it is......!!

We're suppose to have 25 tons of small pea gravel delivered today, but so far the truck hasn't showed up.  He was suppose to be here between 1-3pm and it's past that.  It's coming from Phoenix, I guess people in Cochise county don't use small pea gravel, I called the office and they are looking for the truck.

He just called and said he's had mechanical issues, so I gave John the phone.  John is talking to him and they are talking about we start feeding at 7am, which leads me to believe we aren't getting our gravel tonight..............LOL
Posted by Tish at 3:04 PM