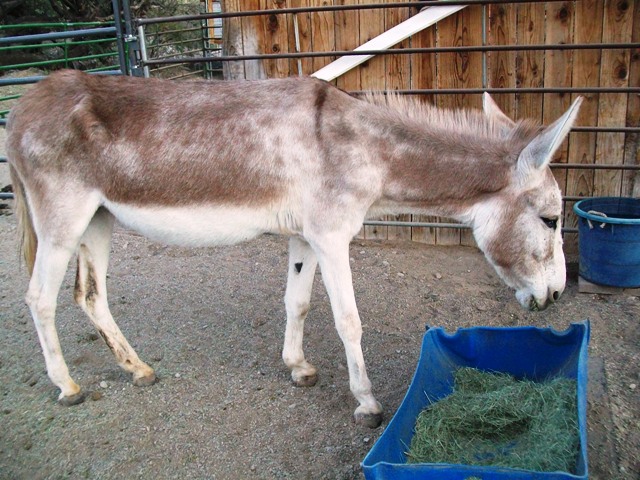 I'd like to introduce Rosie, aka, Zoe.  Yesterday Lynn and Linda drove up to meet Christine Griffin from Equine Well-Being rescue when she came down from Snowflake to attend the meeting with the AZDA people.  She came in for the meeting and they headed home with a very pretty girl named Bunny.  She's going to learn to pack burro race I think.  I haven't taken a picture of Bunny yet, will try to get one soon.

We had heard about a jenny that needed to be rehomed a couple of months ago.  At the time some of the rescues in the state were talking about it and the assumption was someone had picked her up.  We found out that wasn't the case, that she still needed to be rehomed, she had lost her friend another jenny and we were told she was depressed.

Talked to the owner and she agreed to relinquish Rosie to us.  So Lynn and Linda picked her up on the way home.  Linda got in touch with us, said she was very thin, smelled bad and seemed weak.  They took her by the vet clinic in Benson on the way home and had blood drawn and let the vet look at her to see if anything needed to be done right away.

Jasper has a dental appointment Tuesday, so we called that vet and she said to bring her in  with Jasper to make sure her teeth are OK.  Jasper has a pretty bad parrot mouth that needs to be checked on a regular basis.

The picture doesn't show how thin her hips are and how little muscling she has on her rear legs.  It also doesn't show her ribs.  She was very interested in her hay last night and this morning.  And she has been pretty perky ever since.  So I think she will be an easy rehab.  We still have her on short rations and will get her up to speed on eating over the next few days.  With that belly she is probably wormy, so the vet said to worm her over the next couple of weeks.

The problem is we already have a Rosie, another pink roan color.  Usually we don't change a name unless there is a good reason.  Having 2 with the same name is a good reason.  So we started throwing names around.  The winner is............Zoe........A Greek name meaning "life."..... We hope she has a better life and all the hay she needs for the rest of her life.

The meeting Suzanne and I went to with the AZDA people was good.  They seem to be interested in working with the rescues and making sure the animals are treated properly.  They also want to have meetings with the rescues on a regular basis to make sure everyone knows what's going on and what needs to be fixed or changed.  We had a meeting with different people about 6-7 years ago and all I remember from the meeting was them saying over and over again, "we just don't have the personnel".

We're getting ready for a couple of parades with some of the donkeys.  We're also going to have an Open House in conjunction with the Cascabel Community Fair early in December.  This will be the 39th year they've had the fair and it's been about 6 years since we participated.  Should be fun the donkeys love when lots of people come to see them.

I am happy to report that the mesquite beans are no longer a problem.  There are still a few beans in their poo, but not enough to be a problem.  YEA.........!!!  So they are getting to go out after eating like they usually do.
Posted by Tish at 6:42 PM

Hope Zoe is doing better today. I love the Walk for those who have passed, what a great way to celebrate their life.
Steph