Yesterday Zoe was walking all over her pen, very alert, eating everything we brought to her.  We actually were only feeding her chopped hay, plus a few animal crackers of course.

This morning, she was down.  Tonight she is still down.  Dr. Jeremy thinks her system is so weakened because of her poor body score, the trip from up by Phoenix and yesterday used up what little energy she had being alert and moving around so much was very hard on her.

Being down isn't a huge problem, but making sure they don't dehydrate is.  She's interested in eating anything and everything she can get her mouth on.  We have to be careful to feed her small amounts throughout the day, so her system doesn't get overloaded.  But drinking enough liquid can be a problem.  So far she isn't drinking as much as I would like.  In this video she is drinking out of Linda's hand, but she won't drink out of a pan.

Suzanne and Linda have gone to Walmart tonight to buy a couple of watermelons.  That's always been my "go to" for hydration and I'm sure she'll eat it, she's eaten everything else we've put in front of her.

She's bright, alert, ears up and watching everything going on around her.  Tonight I passed her by with the mush buckets and she brayed at me and watched me walked past and walk back past.  So I got her half an apple........LOL

She's been being turned from one side to the other all day about every 2 hours, to help with circulation, and pressure sores.  Lynn says he's sleeping out with her tonight.  So we'll just have to wait and see how she is tomorrow.

John and I weren't here most of the day.  A dear friend Mike Benjamin died a couple of weeks ago.  Mike was known as Miner Mike. Thousands of tourists have pictures of Mike  and Zeke on the streets of Tombstone as a remembrance of the "town too tough to die". 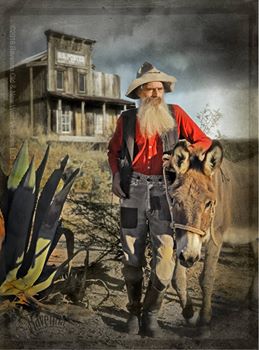 Thank you Margaret Bota for the video of Mike's Walk Down today.  This is how Tombstone pays respect when one of their own continues on their journey of life.  It was really interesting to see so many people in circa 1880 dress.

Teresa asked if we would transport Zeke to Tombstone, so he could lead the Walk Down, so we did.

So sorry to hear about Mike Benjamin. He was sort of a legend in Tombstone.
My condolences to his family, including Zeke of course.

Did Zoe's friend die from neglect or lack of food and water? Sorry to see such a pretty little thing die when she had such a bright future with you guys.

Unfortunately, it's so sad, she hadn't given up at all, but I guess her heart did. Lynn stayed out there with her all night and just about sunrise, he said she got very alert, rolled over and was gone. She was so weak, they almost couldn't get her in the trailer. Then over 100 mile trailer ride and a day of being on alert, new place, lots of donkeys moving around and someone being with her at all times, maybe was just too much stimulation for her heart. She was only about 12 years old.