The woman that has been making sure he had water hasn't seen him, so he still out on the forest service land.  When we were there we saw cattle out there, so there is water available.

These videos show as close as we ever got to him, except when he went to the trailer where the girls were. And then Lynn was the only one very close as he was trying to close the corral panel behind the jack.  That's when he jumped over one of the other corral panels they had set up as a chute and headed for forest service land.


Michele is still wanting to try to catch him if at all possible and is keeping in touch with the woman at the ranch, in case he comes back.

Tomorrow we are suppose to go to a meeting in Tombstone about have burro races there next fall.  They are going to need a lot of volunteers to make this happen.  Unfortunately in these types of situations, a few people usually end up doing all the work, hopefully they will be able to get enough hard working people together to make it happen.

Sunday a group of the runners that ran with the donkeys last week-end are coming out to play with the donkeys out here.  Some of them might want to walk donkeys in the Tucson Rodeo parade next month.  John and I probably won't be walking, and we plan on taking twice as many donkeys as we had last year.  Our daughter-in-law, who is a horse person, has even signed up.

I got my brace off this week...........Yippee......!!  For some reason, I thought once the brace was off the leg would be good.  The knee is stiff from non-use and only has about 70% motion backwards.  But I am still going to physical therapy and will be for awhile, so hopefully it will loosen up with pain and torture.......LOL

Our son called this week and FINALLY said the roll cage is in and the car is about ready to come out here for John to work his magic.  Well, it isn't magic, but there's a lot of stuff to be done between now and March 9th when I'm suppose to race.  The motor is in the shop, it had a blown head gasket when we got it and hopefully that's all, I haven't heard.  Also haven't heard when it will be done.....!

John's been putting the least wrecked car from last year back together, just in case.  I have always raced for points and to miss the 1st race of the season would be a disaster from my point of view.  So he's going to duck tape that car back together to hopefully stay together.   I don't think it will be competitive, but it will keep me in the points race for the season.  The best case scenario would be to have the new car ready to race, but it never hurts to have a plan B.

It's really been cold here in the mornings for about the last week or so, which makes for grumpy donkeys in the morning until the sun gets up.  The guys always set them up to eat in the sun which helps.  The afternoons are warm and sunny I've even seen a few flies, so I'm putting out a fly trap today.

Link, Linda and Lynn's year old "baby" mammoth is going thru a growth spurt right now.  They think he is going to be bigger than his half brother Turbo, his legs are longer and his back is at least as tall as Turbo.  Mammoths grow until they are 5 or 6 years old, so he's still got a lot of time to get a lot taller.......!!! 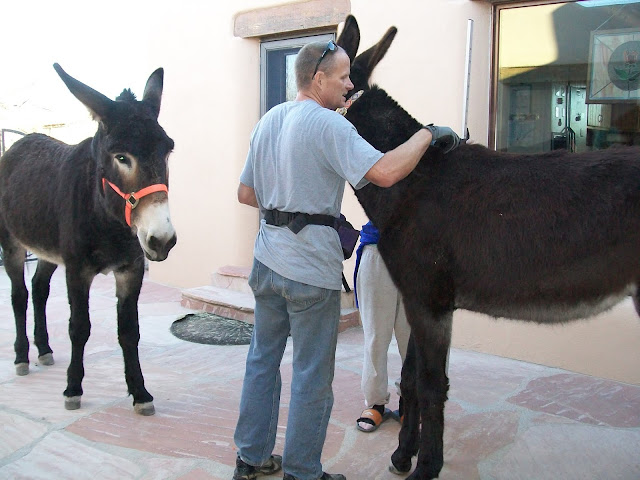