I think we're all ready for spring.  We've gotten enough rain and snow that the ground is saturated and it isn't getting very warm during the day to dry the ground.  I know we will appreciate the moisture later, we've been in drought conditions for years, so it is welcomed, BUT a little sunshine wouldn't hurt...!!!

John and I managed to make it  to the big dirt races Friday night in the Phoenix area.  We dressed for cold and were very glad we did.  The Wild West Shootout is one of the few races this early in the season for late models and modified and draws drivers from all over the country including Canada.  They had 147 cars sign in Friday night and really put on a great show, lots of action and a well organized program that moved fast. We were going to try to go back up today for the finale tonight, but we both decided that we'd rather rest up.  LOL

Went to our end of the year banquet last night for Tucson Speedway. 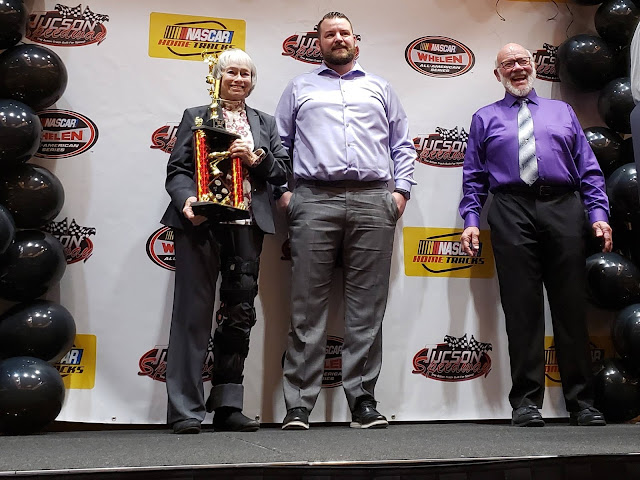 Unfortunately I still have on my brace for at least another couple of weeks.  A lot of people asked if I was going to race again.  Still plan on making the first race the 9th of March, hopefully the car will be ready by then.  If not, John has plans to get the old car glued together enough to get on the track and at least stay in the points race.  We'll see how it goes it seems like time is really flying by and March will be here before we know it.

Lynn and Linda went to a "people" race this morning in Tucson.  They said there were lots of runners, maybe 100s, they haven't found out yet where they placed.   Some of the runners that want to run with the donkeys were running and I guess are all ready for next Saturday's Donkeys and Donuts run in Tucson.

It looks like there will be 12 donkeys for the run, although Lynn and BlackJack might also go, in case someone would like to walk a donkey.  Yesterday I think we saw BJ actually running for the 1st time in history.  Rambo was being a jerk and chasing BJ.  BJ was running and kicking Rambo, which didn't deter him at all.  BJ is a "mosey" type of guy, he usually doesn't waste energy unless he has to.  Rambo finally found something else to do, today he is being obnoxious again.  We really don't know why he is so aggressive, everyone is making sure to let him know that type of behavior isn't allowed.  He seems to realize we don't want him chasing the other donkeys and it usually deters him for the moment, but within a day or two, he's at it again. 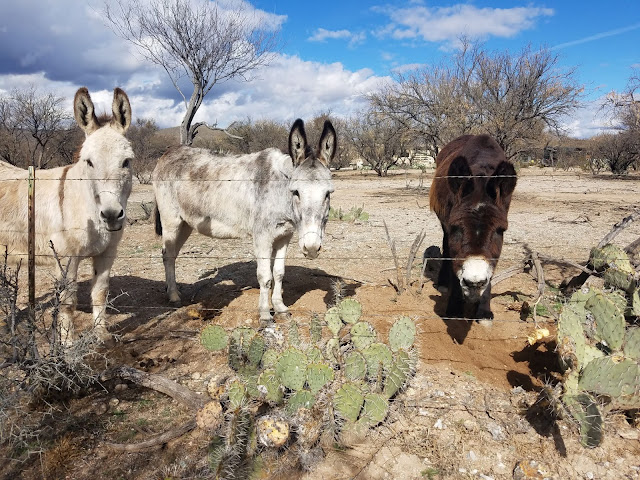 Linda took this picture of BlackJack showing Jasper and Leddy how to dig up cactus to eat,  At different times of the year they eat cactus, other times they eat greasewood "ie"  creosote bush.