PENNY IS "OUT AND ABOUT" 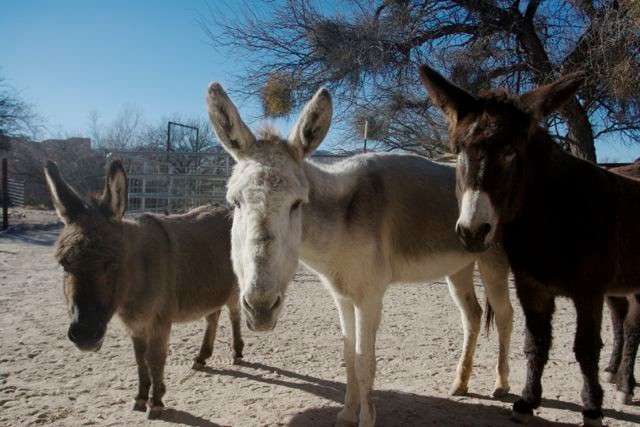 3 OF THE GIRLS, LITTLE LYNN, MISS PENNYPACKER AND COQUETTE
Thanks, Shannon for the picture

After breakfast yesterday morning, Penny got to go out after 5 days being incarcerated, from her point of view.  She's eating good for her, so I guess her mouth is feeling better.

The first thing she tried to do was entice the boys into "bad" behavior.  John and I were in Tucson, but Linda said she was really putting a lot of effort into it.  Unfortunately none of the guys were interested, no matter how hard she tried.  Today she seems to have forgotten about it and is off with her BFF, Coquette in Burroland.

Linda gave Gus a bath this afternoon after it warmed up from our 17* start this morning........ Thankfully as soon as the sun came up it started warming up pretty quickly.  Gus doesn't drop to pee, never has.  I asked Claire if she had ever seen him drop and she said she didn't think so.  I've said something to the vets and they said it isn't all that unusual.  He's the only one I've ever seen not drop.

Because he doesn't drop, when he pees, it sprays everywhere.  Years ago he developed horrible sores on his lower rear legs, the skin just sloughed off.  The vet did a scrapping and he had 3 different infections, one was staph.

Until it got so cold John had been rinsing off his hind legs a couple of times a week, but it had been awhile and Gus' legs were looking pretty icky.  I think Gus actually enjoys getting a bath, unlike the others, so Linda offered to bath him.

I guess we're off and running on participating in the Tombstone parade the 18th of March.   Jeanne, a friend of Linda's came out yesterday and met the donkeys to get a plan for sewing.  She really enjoyed meeting the donkeys and said she was surprised at how different they are from horses.  Linda got a text from her today and she was at one of the Dollar stores, having fun picking up goodies.

Yesterday when John and I went to Tucson, we went to Party City.  I've never been in one, Linda said it would be overwhelming and it was.  I've never seen so much green stuff in one place in my life.....!!  LOL  I picked up a few things, but Linda and I are going in again Monday to shop.  She's more familiar with shopping than I am, and was disappointed she didn't get to go yesterday.


Cisco seems to be walking as well as can be expected for him and his hoof isn't warm, I have no idea what it was, but it seems to have "fixed" itself.

Tomorrow will be the 1st practice at the asphalt track.  Lynn's car hasn't been on asphalt yet.  We want to know how it goes on asphalt, but Lynn is busy tomorrow. So John and I will tow both cars, they need to go thru tech, and it's been so long since I was on asphalt, I need to find out if I still remember what to do.........LOL

Unfortunately the dirt track is going thru some changes, with new promoters.  They say nothing will change, but that's not usually the case, people have different ideas.  I really hope they get it all figured out and we have a chance to race, even if it isn't very often.  I think they only have 4 more races planned for the Hornets.

Please thank Linda for me for bathing Gus. I'm sure he loved it. He is such a good boy to work with. Really a people donkey.

I think she probably enjoyed it as much as he did, she really loves messing with the donkeys. I delivered your message, she said....."anytime".....!!