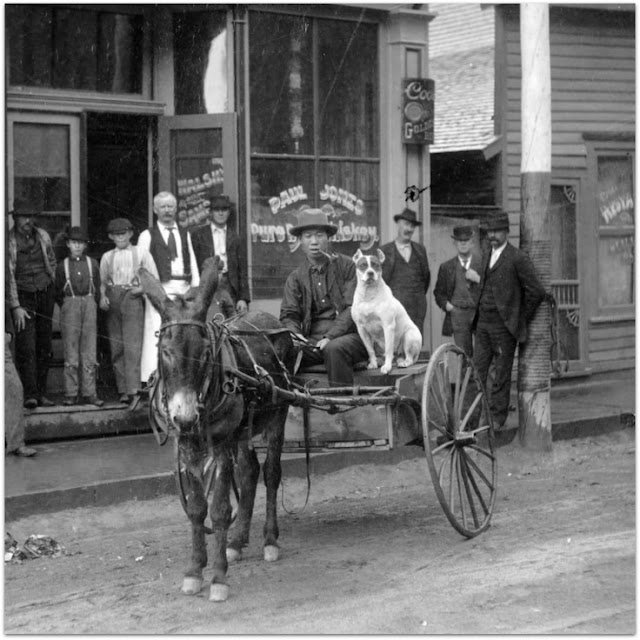 Little Casper, has not attacked anyone, has not tried to intimidate anyone, hasn't kicked at anyone.........I can't figure out why he was a 3 time loser at the recent auctions.  Supposedly it was for cause, cause he didn't play well with other equine.  He doesn't seem to have a problem with donkeys, he follows them around or is in the general area of where they are.  We'll give him sometime to get the testosterone out of his system, before I see if Stacy can have him at her place for a few days to see if horses stir him up.

He's obviously been tricked to be caught, unless he is in the redneck squeeze he's not the least bit interested in being cooperative.  John is working with touching him and can now scratch his neck or butt.   This has been one of "those" weeks, something going on every day, but tomorrow except for a couple of tours we'll at least be home.  John says he will put Casper in the squeeze to get a halter on him and then use a curry comb on him to get some of the hair off.  He is shedding like crazy and that should feel pretty good, might even be worth having to have a halter on for a little while, who knows.

Since he's going out except at feeding time, we put him back in the pen that he took the gate off the hinges a few days ago.  Figured he couldn't get too bored if he was eating.  He thought we had lost our mind when John tried to get him into that pen.  He kept going to the other pen.  I went out to help and he finally figured out what we wanted him to do, with a little pointing and tongue clicking.  Donkeys learn real quick that pointing means they are suppose to go "that" way.   It only took one time of taking both of us, now he goes in without a problem, and in fact about half the time he's already in the pen, waiting for a carrot.

Last night John let everyone out at bedtime and about half of them usually wait on the path to the house for another animal cracker.  John said they were nicely lined up, so he was just going down the line sticking crackers in eager mouths.  Right in the middle of the herd was a little white mule, waiting for his cracker.  He's a smart little guy, that's for sure.   And seems more than willing to go along with what ever is happening.  We have 2 tours tomorrow and they will probably be later, so the donkeys will be out of their pens.  It will be interesting to see if he comes around when the donkeys are mugging the people for attention.  We don't do pellets or crackers when the donkeys are loose on the property, but they do enjoy all the attention and petting.

Everyone is doing good, we've started putting a fly mask on Lynn, because of her watery eyes, but everyone else are OK.  Even though it's been pretty warm, and in fact the mesquite are leafing out, which is the start of spring according to the oldtimers, the flies haven't been a problem yet, thankfully.

Daisy has been picky lately about eating her mush.  She has a problem with choking, which is why I soak her pellets, but she choked the other day on hay.  Some of my older donkeys get Nutrena Senior dry, which means it doesn't have so much molasses in it, that it's sticky.  Since she choked on hay, John decided to run her hay thru the leaf shredder, like Cisco's, Penny's and Cheyenne's.  I thought might as well try feeding Daisy dry Senior mixed in with her timothy pellet and beet pulp to see if she'd be more interested in her mush, it's a smaller pellet.  It's been a long time since she finished her mush and hay, but the last few days she's polished her plate.  I guess the mush tastes better with lumps in it........!!

I am anxious to see Casper curried out, he will look and feel better then he has in a while probably. His brain surgery seems to be giving him some sense.

I just read he wet to see the neighbor or at least to eat the grass.

Yes, he did, John said he even acted like he had been caught doing something wrong....LOL

My typing its not wet but went. Glad you can read between the lines on my posts.