So far this week John and I have been gone every single day.  Nothing really exciting, just things that needed to be done in town.  Yesterday we helped Santa by taking the great grand-kids goodies into Tucson for Christmas morning high excitement.  Last year they got Strider bikes, which have no pedals.  They have to balance and steer and use their feet to push off.  This year they are getting "real" bikes with pedals.  They also come with training wheels, which our grandson is going to take off, that's the beauty of the Striders.  The boys should already have that balance thing figured out and not need the training wheels.

We also went back to where we delivered Ruger and Wister to give them their rabies shots.  The woman was tied up in the house when we got there, so we went out to where the boys were.  There are pole fences around some of the trees and Wister was inside the fence.  When he saw us coming he put his head down, scrunched his body down and out he went.  Unfortunately the poles are set at horse, not donkey height.........LOL 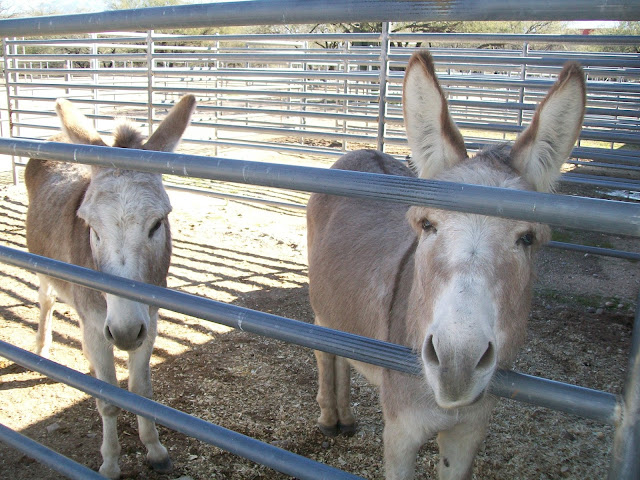 It looks like they are in a pen, but they really aren't.  They are standing in their turn-out, but the end gate is open, so they can roam all over the place............like where the mesquite trees are suppose to be in protective custody. I should have gotten a picture of the barn, it's really a nice one.  I noticed Ruger had figured out how to go in and out of the barn with no problem.

The fencing is suppose to be put up in January at their foster home, and they will go back there and be permanently adopted.  There will be a strand of barbed wire 6 inches above the no climb fence, to discourage fence leaning by the boys.

Julius, the outdoor cat has been coming in more and more.  He likes to come in mornings and clean up the canned cat food, the other 4 have for breakfast and then he lays in the sun, or gets in Snooky's doughnut bed, much to Snooky's disgust.  So far he usually goes back out in a couple of hours, but he has stayed in all night once and all day once.  I don't know if he is getting out of the cold, or if he is trying to figure out if he wants to give up his independence.  He's actually a full brother to Snooky and a half brother to Sunny.

The donkeys are all doing good, enjoying a little extra hay because of the cold.  I've tried upping the amount of hay pellet and beet pulp mush, and some of them are leaving a little bit of it.  That's good to know, we were wondering if they needed more than we were feeding them.  Obviously not, or at least we're pretty close on what we're feeding.  As long as they don't start gaining weight, we'll probably continue feeding extra.