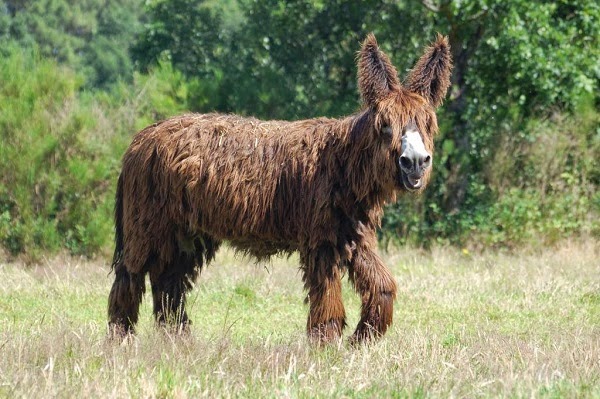 Today we got hay delivered.  I was really surprised it only went up about 60 cents a bale.  This time of year can really sock it to you, in price sometimes.  A truckload is lasting us about 5 months.  Amy that cleans pens, gets hay to feed her critters, so if that wasn't happening I guess a load would last us about a year.   Chris doesn't mind driving her squeeze out here to unload a split load, which is 1 trailer, out of 2 trailers, so that works out great.

Haven't heard from Diane on how Ruthie did without the boys, last night, so I assume no news is good news. I think I heard Wister bray a couple of times last night.  He hardly ever brays, so we aren't sure it was him, but it wasn't a bray we recognize.  This morning he was busy playing with Pancho before John went out, and later on he was playing with Ruger, so I don't think he is too traumatized.  Ruger might be a little shocked though, last night John saw Wister attempting to nurse on Ruger.  John said Ruger took off in a hurry........LOL

The hay people are doing ok with the lower price of gas. I don't see groceries or anything else coming down either. We need air line tickets for the summer but they are more then before and most charge for the bags you take.

Chris will cut me a deal if she can. This time of year is expensive for hay, I guess to make the people that didn't plan ahead, when hay was being cut, pay. I won't fly if I can drive and if I do, I only take a carry-on. Figure I can wash clothes if needed. If they start charging for carry ons, I'll get a bigger purse. LOL

We are going to Germany to see our grandson graduate high school, they allow a free bag for international flights, we then hope to go to Seattle to see our other grandson graduate college. We will wait and see if my husband feels like a long trip. He only has one lung and it is hard for him to do too much. Have a good week end.

Lived in Germany 3 years, loved it, especially the schnitzel.....YUM Hope your husband gets to make both trips, don't want to miss graduations if at all possible.