After getting chewed out by my vet about "no animals have ever refused to eat the Neoplasene" I'm giving it another go, although my heart isn't in it.  I asked her if she had ever tasted it and she hasn't....!!!  Aha, could be why she has no qualms about ordering it..........LOL

So the last few days I have been chumming little Pepsi with a mixture of oats and pellets, believe me he thinks his ship has finally come in.  I added a little molasses last night and his body language said, "bring it on" as he dove into it.  Usually the minis get about a 1/4 cup or less of timothy hay pellets mixed with a large spoon of soaked beet pulp and Lakin Lite a local bermuda/alfalfa hay pellet.  So he's getting a 1/4 cup of oats, 1/4 cup senior, 1/2 cup of timothy pellets and a spoon of mush.  This morning I added about a tablespoon of molasses WITH a tiny dab of the offending product and he ate it........!!!  As tiny as that dab was I could have ate it, if I didn't hate molasses.......LOL  So I will up the ante until I get to 1cc of the nasty stuff twice a day or he refuses to accept anymore at a lesser amount.  The place below his eye never broke open or became a wound, which is a sign of no cancer cells, so we'll just do what we can and hope for the best.

Had a good night at the races last night, finished 3rd in the heat race and won the main event.  It's always a good night when you win.  Thankfully the car suffered no major damage, John's just going to wash it on the trailer and it will be ready for battle again tonight.  They have a big 2 night show for the modifieds and "allow" us to participate.  These back to back nights are very tiring for old people.......!!! LOL
.
They had the drivers bring candy for the kids that were dressed up for Halloween.  Our grandson and his wife brought Kyler out after he hit his neighbor's up for candy. 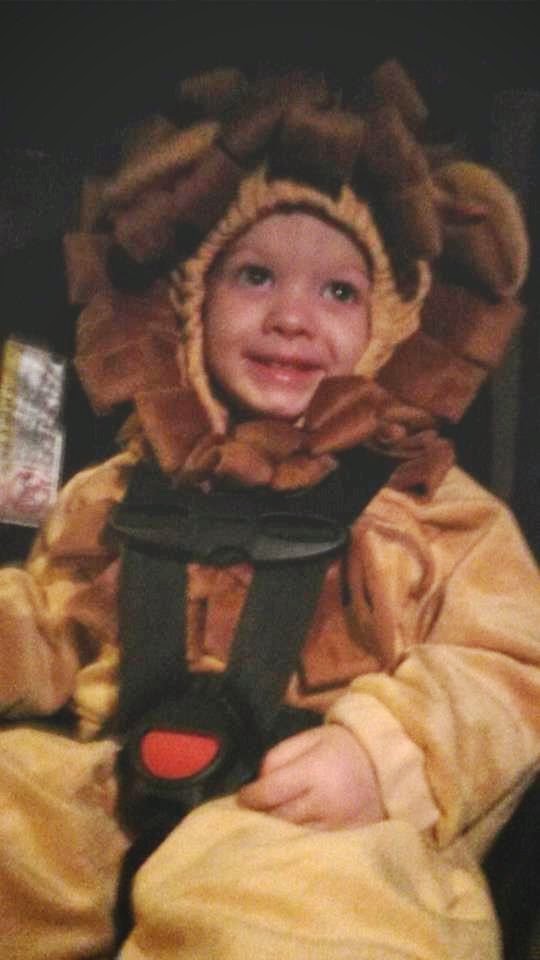 They didn't have Hunter for Halloween, he's with his Mother in Phoenix, so I don't know what he had for a costume.   Kyler's lion outfit was really cute and he seemed to have plenty of candy by the time he got to Grandma's car and candy.......!!
Posted by Tish at 11:21 AM