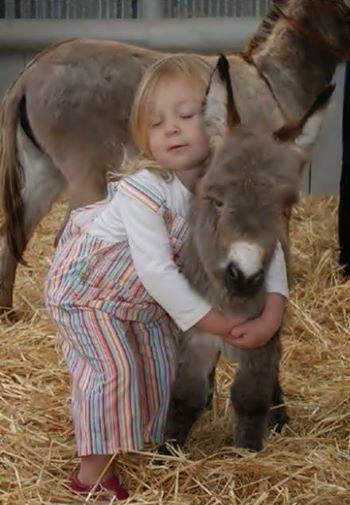 HOW CUTE IS THIS?

Eighteen degrees this morning 21 degrees yesterday.  But, in the desert those cold temps don't usually last long.  Yesterday was nice, sunny and warm, today looks like it will be a repeat.  Too bad we couldn't put off chores until about 9 or 10am.  Don't think the donkeys would allow that.......!!!

I picked up my super duper fly trap this morning, the one that seems to be real good at catching lots of stable flies.  A couple of days ago I noticed a praying mantis on the outside, waiting for flies to land where she could get to them.  Yesterday morning she was still hanging on the side in the cold.  I guess she warmed up enough to move yesterday afternoon, because she was gone last night and wasn't there this morning.  I'm not sure about the life cycle of praying mantis.  I know this time of year we see lots of big fat ones, which I think are females with eggs.  It seems that they probably lay their eggs, maybe in the ground, I don't know and then die in the cold.  One of these days when I run out of things to do, maybe I'll look it up.  I've seen little tiny ones less than half an inch long earlier in the summer.  If they only live one season they sure grow quick, since most of the ones we see this time of year are 4 inches long or more.

Since it's getting cold the starvation rations have been upped, much to Rosie, Coquette and some of the others pleasure.  Rosie is quite a "beaver", she will chew on just about anything wood and has started dismantling her plastic water bucket.  I don't know that she is that hungry, she doesn't try to run John down when she sees the hay bucket.  She is very nervous for a donkey, and I'm not sure her chewing doesn't have something to do with her personality.  It's not cribbing, actually I don't know if donkeys crib, never heard of one.

Cisco is the only one getting doctored now.  I'm still putting Animas in his left ear.  It's much better and doesn't have that YUCKY smell.  Because of the gooey texture of the Animas I can't tell if the ear is dried out or not.  I'll doctor for a few more days and then see what happens.

Pepper is still getting Tucoprim and we haven't heard him cough, so I guess whatever he had is going or gone.  It's been 5 days which is the minimum for giving antibiotics, so a couple more days will just be a little extra insurance.

Well, it looks like my racing days are probably over.  We were told at the driver's meeting Saturday night that the track had been leased by USAC for 3 years.  USAC runs open wheel cars like sprints, 1/4 midgets, not stock cars.  The latest rumor is we're done, USAC will only run 6-9 programs a year and we won't be part of the program.  Unfortunately the closest dirt track is at Casa Grande, half way to Phoenix.  It's exactly 120 miles from our gate, the reason I know that is we raced up there years ago, when we had less donkeys and were younger.............LOL  If we went up there I would have to race Bombers or factory stocks or something like that.  Nothing wrong with that, but I've got a perfectly good Hornet with a rebuilt back-up motor sitting in the garage.  We use to get in about 4am, and it was hard then, can't imagine what it would be like now.

I finished 2nd in the main event Saturday night and 2nd for end of the year points.  So I can't complain, just wish we had someplace to go play.

We have been having cold weather here too, I mean for Florida, but to be up to 80 by the week end. I am sorry about your racing.

My folks lived between Inverness and Floral City or about 10 years before they moved out here. Where are you? I'm sorry about the racing too, but this last year was really a good one, so guess I can't complain. It's nice to be able to end on a high note.

We are just south of Tampa in The little town of Ruskin, it is a farming community but Amazon just built a big shipping warehouse here so it brought a lot of jobs. We are close to Sun City Center which is a retirement comm. The winter is really busy with snow birds. This cold weather makes the oranges turn orange, without it they would ripen but stay green.

We are about two hours from floral city, south.

I didn't know oranges wouldn't turn orange without cold, interesting. Not that familiar with the area around Tampa, we usually went south of Inverness when we went somewhere.