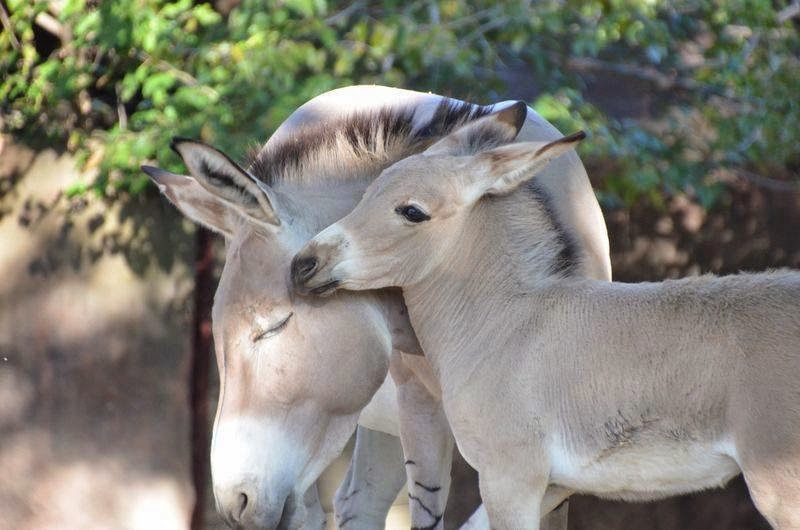 It was 16 degrees this morning.  I'm sure there are people in other parts of the country that get tired of hearing my whining, BUT.......... I'm a desert rat, I have neither the clothes or the thick blood for these temperatures and I'm not going to be silent about my displeasure........!!!  LOL

The donkeys aren't willing to come in when it's cold.  They find a spot that gets early morning sunshine and there they stand, no matter how many times John rings the bell.  Usually we go ahead and feed the ones we have and then John goes out to rout the hold outs away from their nice warm spot.  Tula is particularly irritating.  She will ignore any efforts to get her to come in until the last minute.  Then she will show up, run in her pen, turn around and start yelling at you.  We haven't figured out if she is yelling to say, "here I am", or if she's yelling because her food isn't waiting for her.  Grrr.....!!!

This morning Cisco didn't show up at all, even after everyone else had been fed.  That was worrisome, Cisco usually doesn't go very far and shows up pretty quick.  So John went out looking for him.  Finally found him standing in a nice warm sunny spot.  Cisco's got real bad legs from being a roping donkey in a roping school.  He gets along pretty good, most of the time, but I would imagine these cold mornings make his legs hurt.  He was moving pretty slow.  Pepper's not walking much better.  I'm sure they both have arthritis along with all their other problems.

John's started cutting up hay for Cheyenne again.  For months all she's been getting is mush, but she started picking up little pieces of the other mini's hay when we'd let her out of her pen.  So John is giving her a handful each feeding.  All she does is chew it up and spit it out as little quids, but I guess she enjoys it.  Someone comes along and eats them later................YUCK!

Still putting fly masks on about 6 of them that the flies bother.  There aren't many flies left thank goodness, but the few still around prefer those donkeys eyes.  I even had to put Cisco back on benedryl, his sheath got warm and he started scooting on it, which makes it bloody, etc, etc.........!!!  Two days of benedryl and everything is good, well except for doctoring the scooting scrapes.

We have had cool weather and a little rain here in Florida and my back and leg has really hurt, I am sure the weather affects the poor little guys with bad legs. Today was perfect, about 75 and sunny. You and Mr. John are special people for taking care of the donkeys, thank you again.

I just wish we could do more. Should have started this lifestyle about 40 years ago when we had more energy.........and muscle. I had to buy 80 pound bags of pellets instead of 50 the other day. John was not happy....LOL We keep saying in our next life we'll rescue hamsters or mice, their supplies weigh a lot less....!!!

I worked 23 years in school food service and the flour, sugar and most dry goods came in 50 lb bags. I could pick them up and toss them around like nothing, since I retired I have lost a lot of strength and gained weight. I got an Injection in the bottom of my food today, it really helps the pain but nothing turns this old age thing around, I guess I will just roll with it. Have a Happy Thanksgiving, we are going to Cracker Barrel, a down home rest that is serving a big dinner.

If you worked in school food service, did your school have "school boy sandwiches?" They were always my favorite, I guess they were a take off on sloppy joes. A few years ago I asked a classmate, who's Mother was the head cook when we were in school, to ask his Mom how they made them. But she had dementia and couldn't remember. We have Cracker Barrel out here and we use to go often..........until Golden Corral came to town.

I never heard of school boy sw. We did have sloppy joes and BBQ pork. We are going to Golden corral this week. My husband has a breathing test near where it is. He had lung cancer three years ago and has been coughing a lot so they are doing some new tests, so far no sigh of cancer. The drs. Were sure they got it all, they took out his right lung so he don't have a lot of energy and gets out of breath easily. Anyway I will think of you while I stuff myself at G.C.

No one has, maybe they just had them in Missouri. I'm pretty sure they used commodities, so it was probably some mix of mustard and catsup, with oatmeal or something for thickening, because the meat didn't fall off the bun. I'm sure there was something else, for flavoring, just can't figure it out. The flavor wasn't strong, just very tasty at least to a kid's palate. It would be disappointing if I tasted one as an adult and it wasn't what I remembered.
I hope your husband's test all come out good. John and I are both survivors..... so far. It's is amazing how many people have or have had cancer these days. I think it's all the stuff in our food, water, and air.
Have fun at GC, I love their fried okra and of course the pot roast...!! YUM...!

Me too on the okra and the rolls. We used to get a canned beef in school that was really good, you could make all kinds of foods with it. Now schools get very little commodities, they cost more then food company prices. The first lady has made so many changes in school food service and USDA that the lunches are small. The area where I worked was a very poor area, the students are not getting enough food. I would see students eat every thing and lick there plates, I always made sure they had seconds and knew which ones were living in a car and fed them extra. I just have a soft heart for kids and animals. Looked over this, too long, sorry.

I don't remember her being hired and don't think she has a degree in nutrition. I've seen pictures of some of the lunches and honestly can't imagine having to serve stuff like that to kids. I wish schools would go back to local or at least state, one size does not fit all.

Well we went to Golden Corral today, we got there when breakfast was ending and lunch starting. Everything was so good and I ate a little extra fried okra for you, they also has fried green tomatoes, they were ok but I like mine better. I love there fresh warm rolls and had to make a bacon sandwich with that. I very seldom buy bacon only to flavor veggies, because I
Ike it too well. I don't have much will power with some foods. Anyway thought of you today.