The weatherman says, Tucson has had their last night below freezing.  We'll see if he's right for a change.  We usually run about 10 degrees cooler than Tucson, so that would put us in the 20's, which is better than the 18 it was this morning..!!!

Made an appointment to get Boaz's knee looked at again.  It's been debrided or scraped 3 times I think.  It is so close to being healed, but just won't finish the job, & now has developed a small lump on the edge........proud flesh?  Doesn't really look like it, so it's time to have someone look at it again.  I was hoping it would be healed by fly season, but I've already received my first batch of predator wasps from Spalding.  Poor little things, I doubt that any of them survived their outing into the cruel cold world.  That's OK, flies haven't been a problem yet, although I doubt they've all frozen, unfortunately.

Looks like a couple of the girls will be going out to a new home soon. 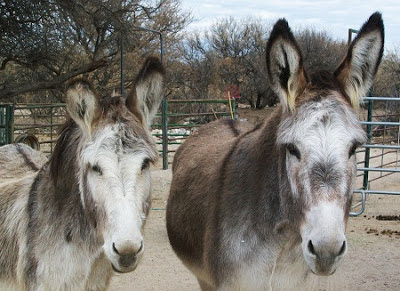 Daisy & Frijolita have both been here for years.  They are bonded, at least Daisy is bonded with Frijolita.  They are going to a home that already has 2 boys in it, one of which is Jacko, one of our alumni.  Daisy has Cushings disease & has to have daily medication, which Laura is willing to furnish.  Laura's animals are her "kids", so this will be a good "forever" home for these girls.

I don't know what Tula will do, the girls are the main members of her herd.  We have talked for years about Tula going to Peaceful Valley Donkey Rescue, in Texas.  Mark has leases, that are monitored daily, but allow the donkeys access to hundreds of acres of freedom.  They are rounded up periodically for worming, vaccinations, & general check-up & then can return to their freedom.

Tula has been here about 8 years, & still has a fear of people.  We can put a fly mask on her & work with her somewhat in her pen.  BUT, it is always on her terms.  Emotionally she will never accept people into her life unless she has to.

Being in a "wild" setting would be the best possible life for her.  PVDR has different leases, some for geldings, some for old jacks off the BLM range, & some are for unadoptable jennies, which would work out very well for her.  Mark said bring her whenever we want to.  We'll see how she does after the 2 girls leave.  If she misses them, we'll probably go ahead & take her to Texas, so she can be part of a herd.