I would imagine most of our winter is over, although we've already thought that a few times this year.  It's bright and sunny, no wind so far today, probably this afternoon we'll have some.  It's nice to be able to go outside in shirt sleeves again. 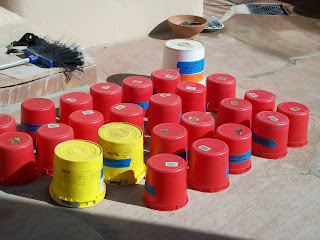 This is the individual buckets for everyone. They each get a miNUTE amount of pellets, maybe a couple of teaspoons.  It's amazing how they can pick those pellets out of the mush and supplements with their very talented lips........LOL 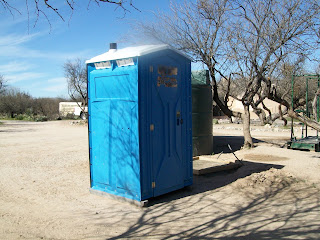 We now have a porta potty on the property.  Always before we have let people come in the house.  That works OK if you just have 3 or 4 people, BUT if you have a lot of people they end up standing in line to use the potty, rather than getting to visit with the donkeys.

We haven't had it "officially open for business" yet, but when people get out of their car and asked if that's a porta potty, you have to say yes.....!!!  We'd like to find someone to paint flowers or something on it to make it unique, but I guess that isn't necessary, people seems to recognize it just fine.........!!  The long drive out here, seems to trigger bladders...........LOL

After about 20 years of being a private sanctuary, as of this week, we are officially a non-profit.  Over the years I had thought about it, would look into it, and not being a detail person it looked very daunting.  Suzanne knows all this stuff, said it was simple and the next thing I know, it's done.  Not much will change we'll still operate about the same, except people will be able to donate if they want, and they can take it off their taxes.

This week-end there will be a clinic held here by Eric Lynn on training donkeys.  He's coming down from Colorado to do about 4 of these clinics in different places.  Some people are coming out today to set up their RVs for the week-end.  Eric Lynn designs pack saddles just for donkeys, in fact Justin was one of his models a couple of years ago, when he decided to build mini donkeys pack saddles.  Should be a fun clinic, John and I are just going to watch.

The donkeys will have to stay in their pens while the clinic is going on.  Some of our donkeys have no idea of personal space and boundaries.  They think people come just to see them and want to make sure they are available for any attention and petting.  Big Gus is one of the worst ones.  Cochise has figured out the tour routine and presents himself for adoration when people are here.

We have a new girl named Olivia here.  She's only been here a few days, but has already figured out the way tours work.  We had a tour yesterday and she was front and center.  She belongs to a friend that actually has 2 of our mini mules.  She offered to foster them years ago, and John said she'd want to adopt them within a couple of weeks.  Sure enough that's what happened.  Olivia didn't have anyone to bond with in the herd of horse, donkeys and mules and was sort of odd man out.  So she is visiting to see if anyone buddies up with her.  She's really a nice girl, easy to work with. 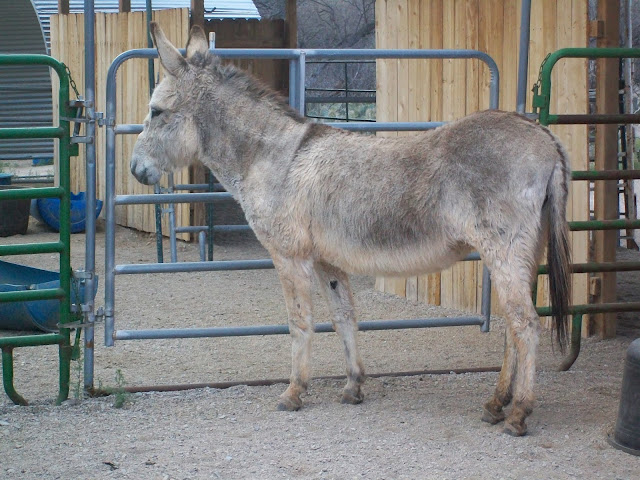 I race again this week-end. Raced last week-end on the dirt track for the 1st time in 5 years.  Well that's not true, in 2017 a guy tried to reopen the track.  He had one race night and we never saw him again.  They have a full season scheduled, but my class only had 5 cars last week-end and some of the other classes were rather sparse too.

For some reason the track promoters around here don't seem to think advertising is important, so people don't even know they are racing, which means not many people in the bleachers.  Not sure how long they can keep going without spectators and cars.  Guess we'll find out.

Someone needs to paint donkeys on you potty, make them like they are peeking round the corners. Run a contest for people to send ideas of how they would paint it and have them send you a picture of their idea. You might have some really cute ideas, some people have great imaginations. Not me though.

That's a great idea, we need to find someone to do the painting first. I think all of us are pretty much painting challenged.........LOL I know what you mean about people having great imaginations, I'm one of those that can recognize talent, just don't have any..........!!! LOL Thanks for the idea Ellie.