It certainly doesn't take long to find out things are going to be a little bit different for the foreseeable future, until this corona virus runs it course.  I would imagine living in the boonies is actually a plus, less people to come in contact with.  Judging from what our Walmart looks like after me going in 3 or 4 times since this crisis started, "boonie" Walmarts probably aren't real high on the goodie list.  I have never seen a grocery store or in this case Walmart not have onions.

I guess you have to be standing there when a pallet rolls out on the main floor to find the "good" stuff.  I'm not trying to stock pile, just buy what is on my list.  I guess everyone else has the same list, because that stuff doesn't seem to be available.

I talked to a friend that works in Walmart that was shopping.  She said they are giving bonus' to all the workers in their next paycheck, they are also getting a  10% discount on anything they buy.  She said they do that during the holidays too.  They are also getting to shop before the store opens in the morning.  I have no problem with any of that.  I would imagine in exchange they are all going to be working long hours for awhile.

We have closed the rescue for tours until this blows over.  Didn't want to, but also didn't want to be the only thing open in the area for entertainment.  Once people go on shut down for a few days, they will probably get antsy and bored.  We'd probably end up with too many people that weren't really interested in the donkeys, but just looking for something to do.

All of the car races are postponed, and the donkey races too.  We all may end up as those "antsy and bored" people before it's over............. LOL  I doubt it, with donkeys there's always plenty to do around here, so I doubt that we'll get bored.

The donkeys are as usual, busy doing donkey stuff.  As long as they get fed and get a few treats during the day, they are pretty happy.  Yesterday right before a rain storm, they all started running as a herd.  We were too busy watching to take pictures but it was really something to see.

Mindy was down here for a few days and took some pictures of the donkeys.  She comes out to hang with the donkeys a few times a year.  They have really figured her out.  The donkeys were out of their pens, when she drove up yesterday.  She got out of her car and started walking towards the pen area.  Casper the little mini mule and Loki both went back in their pens to wait for her.  Mindy usually messes with them when their are in their pens, and they have learned that if they want treats from her, it's best to be in the pen.  We all laughed, they both stood there expectantly waiting patiently for their treats.

Suzanne, Lynn and Linda managed to get in a fun run this month, in Cactus Forest an area in one of the state parks in Tucson. 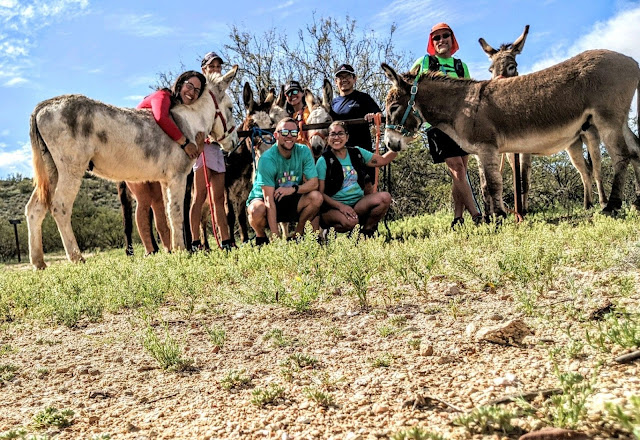 Group picture of some of the participants 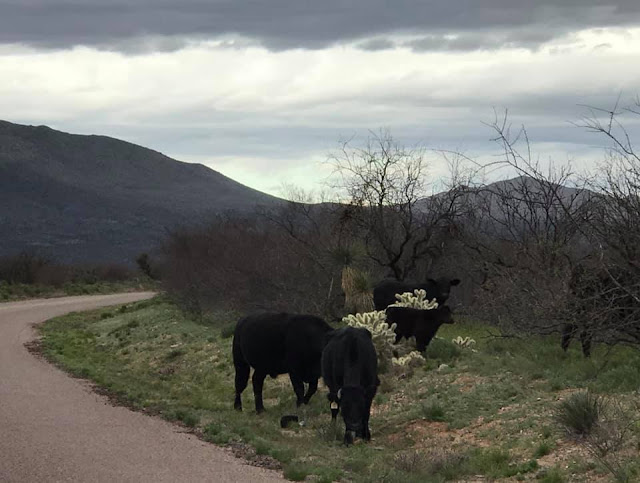 More of the neighbors.  This is open range country out here and it gets pretty scary at night when you are driving and black cows are beside or in the road.  Usually 2 or 3 get hit every year.  We use to joke, that the local rancher probably stood by the road and spooked the cows out in the road, they are worth more dead than alive......that is, if they catch the driver....!!
Posted by Tish at 7:07 PM