Yesterday afternoon it was time to get Jenny and Benjy back in their pen after a day of running loose on the 10 acres .  John and Linda were out doing round-up and I went in the feed room to get some carrots.  Came out and Linda was walking towards their pen and they were following her.  They hesitated a little bit and went right in.  They had only been out twice and were willing to cooperate like that.  They really are amazing animals.  They had followed her from over by the hay barn, which is quite a distance and they could have changed their minds at anytime.

This morning before we went out we heard thundering hooves again.  Hmmmm......looked out the window, saw Link with Benjy's neck in his mouth and they were going around in circles.  It looked like Link wanted to play and Benjy wasn't interested.  It broke up and the next thing we saw was Justin one of the minis, kicking at Benjy with both back feet.  I assume that was to make sure Benjy knew who was in charge..........LOL  Since Benjy is a large standard and Justin is less than 36 inches tall, it looked rather silly.  Benjy just stood his ground and raised his head, so he didn't get kicked in the mouth and after 3 or 4 kicks Justin found something else to do.........!!  Guess he had made his point.........LOL

Everyone had access to Burroland today, which adds another "problem" to rounding up newbies.  But after one abortive attempt to go back into Burroland  they followed John into their pen like it was no big deal.

I guess the next big step will be haltering.  Jenny is really sweet and seems to like to be messed with, so she probably won't be much of a problem.  Benjy seems to be rather opinionated about interacting with humans, he'd just as soon not.  There's no big hurry, we'll just see how it goes.

Cochise has been under the weather for over a week.  He had a lower respiratory infection and once his fever went down, he had to stay in his pen for a week.  Today was the day he got to go out, John and I had to go to Tucson, and when we came home he was standing by the well house, just enjoying his freedom I guess.  Don't know if he went over to Burroland today or not.

Linda got a picture from Colorado of Pepsi playing in the snow with the kids.  They had asked if he had been trained to pull a cart, but we don't know.   He's been learning to pull a sled and seems to be having as much fun as the kids. 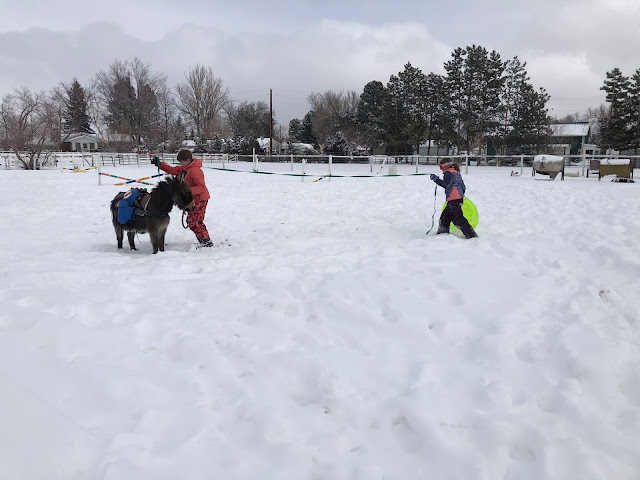