The weatherman said it was going to be cold last night and it was..........11.8 degrees this morning right after sunrise.  That means all the water buckets were covered with thick ice.  Donkeys unlike horses will not break ice, and when it's cold like that, colic can become a problem because of less water intake.  Of course just because we broke ice, doesn't mean they are going to drink.  I think most of them waited until they got out of their pens and drank out of the Richie waterer and the Rubbermaid, both of which have heaters in them.

Lynn, Cheyenne and Penny stayed in last night and had their blankets on.  John said they complained when he let everyone else out at bedtime, but this morning they seemed quite happy in their pens, so maybe they figured out blankets are good even if you don't get to go out with the others.

Tonight is suppose to be about the same, so we'll blanket them again, but after that it's suppose to start warming up quickly the rest of the week. By 9:30 this morning it was bright, sunny and getting warm quickly, it's a beautiful day.

Benjy and Jenny are settling in, they are still staying in their pen for a few days.  Benjy especially is very reactive, he seems to think you are going to kill him if you try to mess with him.  Yesterday Linda went in the pen with a halter in her hand and you would have thought she was there to attack them.  So I hung a halter from the corral panels around their pen.  This morning I added another halter on the other side.  Hopefully they will get bored with the game before I have all the halters we have hanging in their pen......!!!

Cochise still isn't up to par, Dr. Jeremy is coming out again today, when he can fit it in.  Cochise is
active, eating, drinking, pooing and peeing,. but still breathing quick, although he doesn't seem to be stressed.  Yesterday when Linda took his temperature it was 95.?, so she tried another thermometer and it was 96.?.  Their temperature should be between 98 and 100.  He doesn't act like he has a low temperature, so we thought it might be the thermometers.  This morning I couldn't get either of them to go above 92.?.  John had to go to town, so he's going to pick up a couple of thermometers and see if they read higher. 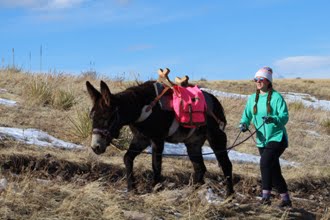 This is Coquette now known as Avery getting in shape for the pack burro racing season in Colorado with her new mom.  I thought Coquette would stay here forever, she was always overweight, she had skin problems in the summer and she was very attached to Penny.  So much so we use to haul her  when Penny had to go to the vet or we'd come home to a hot sweaty girl that had been running all over the place looking for Penny.  A few months before Lynn and Linda went back to Colorado last year, she wasn't relying so much on Penny, so they took her with them.  Now she has a family of her own and from what we hear she is doing really well.   I'm anxious to hear how her races go this year.
Posted by Tish at 11:38 AM