We were all here today, so it seemed like a good time to let them out to roam and get use to the property.  When we let "newbies" out we let them out to roam by themselves for a little while before we let the rest of the kids out.  That way they get a chance to figure out the lay of the land before the nosy herd wants to get in their business.

I thought Benjy might burst out of the pen and take off, but he actually went out pretty good and we saw them later just roaming around checking things out.  That is until the rest of the gang went out.  The donkeys weren't any problem, things had been really quiet, the herd was curious but no squealing and squabbling. 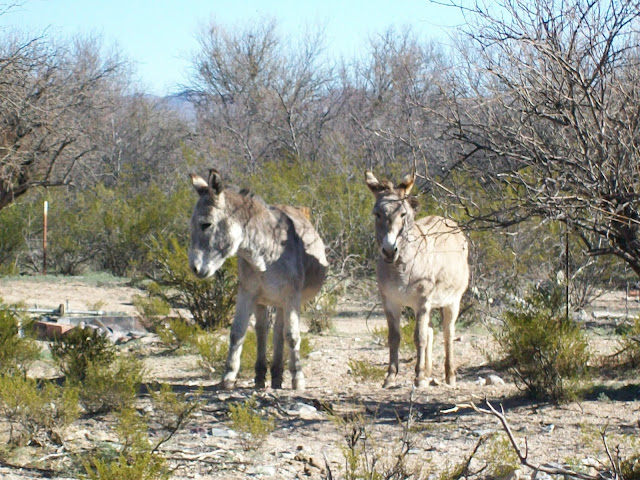 We had a tour this morning and we were all standing around talking and all of a sudden we heard thundering hooves, looked in that direction and here comes Jenny and Benjy with a little white monster hot on their heels.  Didn't get a picture we were all too busy standing with our mouths open.........LOL  Casper didn't look like he was actually trying to catch them, it's almost like it was a game to see if they would run.  They kept on running and since it didn't look vicious, we didn't interfere.

Didn't see them standing next to each other later, but also didn't see anymore chasing.  We have seen Casper chase screaming with his mouth wide open, so either he is mellowing or they weren't very interesting to chase.  For years he didn't even chase donkeys, only horses and mules until just a few months ago.  When he chased mules and horses it was like he wanted to kill them, this was more like play.  I think he must have gotten a donkey to run, and thinks it's fun.


Of course once they are out, they have to go back into their pen at feeding time.  With newbies that is always a challenge, some more than others.  They aren't really sure what you want them to do, when you hunt them down and try to "herd" them to the pen.  So we followed them around for awhile, not letting them stop moving and between the 4 of us finally herded them to the pen area and they figured it out.  I think Tula holds the record, it took us about 3 hours to get her back in her pen the 1st time.

Jenny is really friendly, Benjy not so much, but they will probably do  much better tomorrow, I don't think it took 15 minutes to get them in the pen today, which is really pretty good considering Benjy is NOT a people donkey. 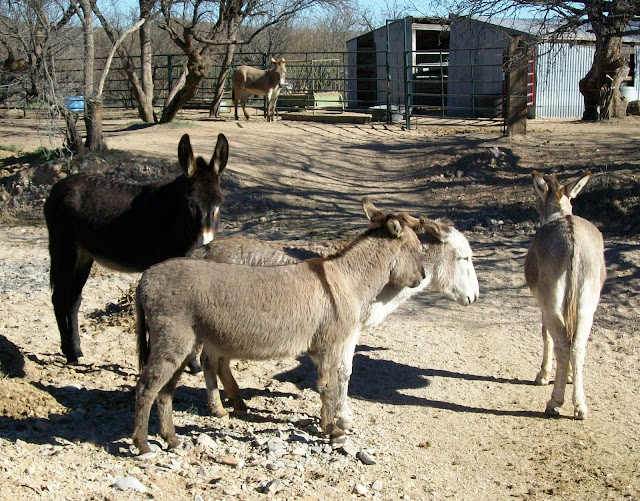 This is some of the herd standing in the wash watching the show. 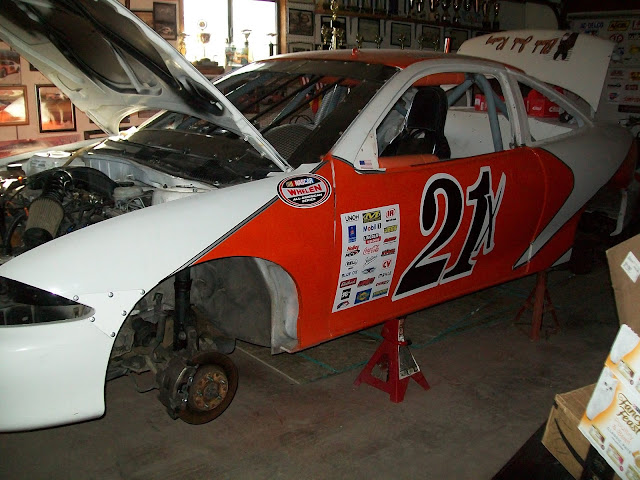 It's getting about that time of year.  The race cars have been just sitting for about 3 months, but it's time to dust off the dust and get serious.  I am going to "try" to race both tracks this year.  Last year's asphalt car will become a dirt car and the Cavalier above will be my new asphalt car.   John will be a lot busier than me trying to keep two cars going, all I do is drive.  If  I don't wreck, and we just bring them home each race night in one piece, it won't be so bad.  But as we always say, as soon as you put a car on the track, consider it destroyed.  Every race is an opportunity to total the car.  You know how show business people say "break a leg".  In racing they tell you "to drive it like you stole it".......LOL  My 1st race will be at the end of this month on the dirt, looking forward to it.