We have received word than Rambo was found dead earlier this week in Colorado.  No reason found, no struggle or anything out of the ordinary. Just laid down in the snow and died.

He wasn't that old, probably in his early teens.  Everyone is just heartbroken especially his new family that had welcomed him and from all the reports we got, he had fit right in with whatever was going on.

He had been a roping donkey before we took him in along with Zorro and Chantilly.  He was always a handful wanting to fight the boys or chase the girls.  We even had him tested to make sure they didn't miss something when he was gelded.  He checked out as a true gelding.  He seemed to settle down in Colorado, maybe all he needed all those years was a loving family and a job.


He was suppose to be in a Saint Patrick's Day parade and of course race this summer and go hunting in the fall.  Just wasn't meant to be I guess.  It's sad that he finally found his place, just wish he had been able to enjoy it longer.

Both Rambo and Big Gus spent 6 years in a rather undisciplined home and returned to the rescue a couple of years ago.  We still have Big Gus, he's not going anywhere for a few reasons.  He's probably over 40, he has a heart murmur and he can be very obnoxious or helpful, depending on your point of view.

Lately we've been having trouble with things getting messed with.  It's easy to blame Big Gus, because his big nose is usually in everything. 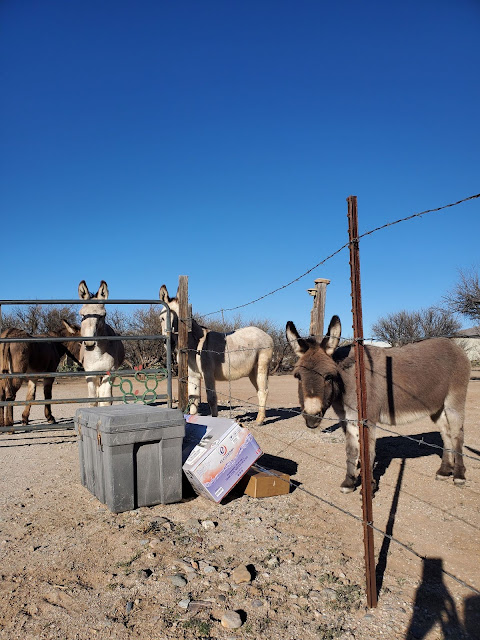 This big tote is out there for a purpose.  The UPS/FEDEX people are suppose to put all packages in the tote.  This isn't the 1st time and won't be the last when they just leave the boxes on top of the tote.  Of course it has to be investigated, they've obviously already knocked it off the tote.  Actually between the 2 boxes they probably wouldn't have both fit in the tote, so I guess we need a bigger tote..........LOL. 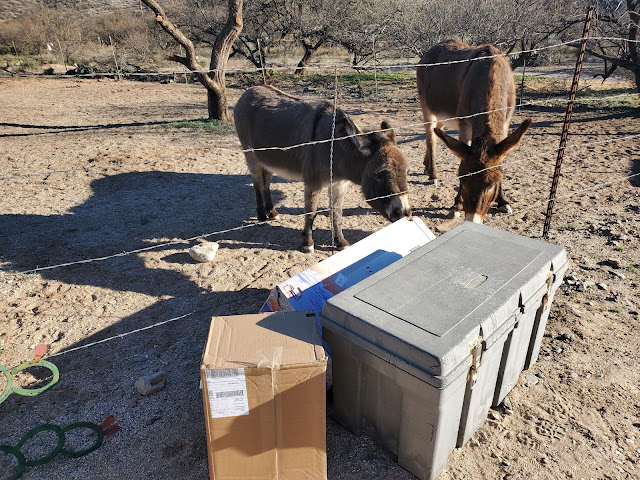 Justin and I think that is Bunny "helping" him eat the box. 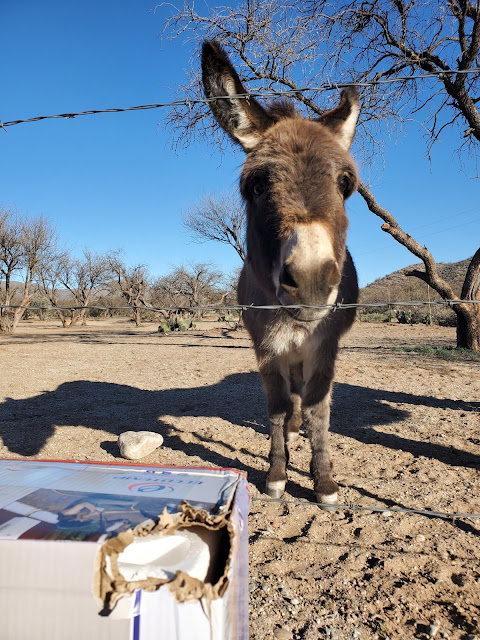 I'm sure Justin is very proud of his handiwork.

Went out a couple of mornings ago and this was the scene by the feed room. 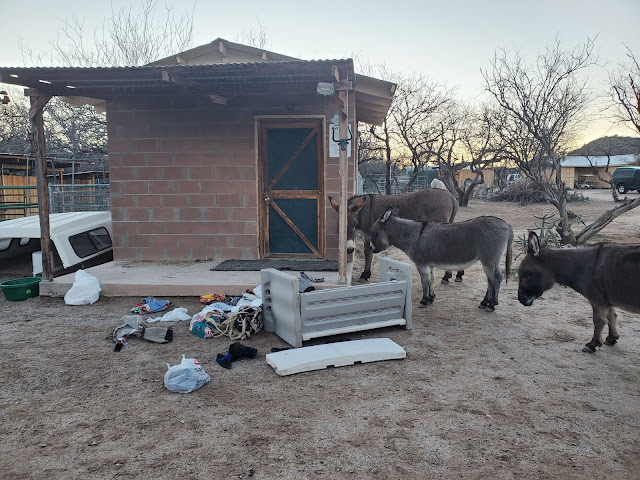 For about 5 years that bench with storage has sat on the feed room porch, fill with fly masks.  Someone dragged it off the porch, dismantled the bench and in the process fly masks were everywhere. 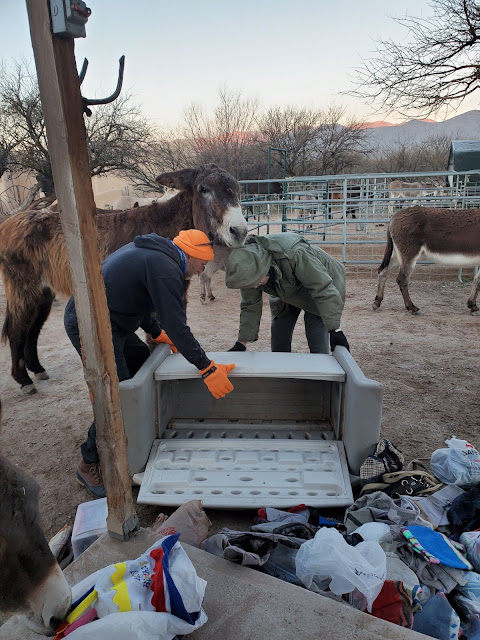 Big Gus is helping as only he can.

Every morning we dread looking out to see what they've been up to.  They are also destroyed patches of prickly pear, which seems to be a rite of spring every year.  I guess early in the spring they need something that is in the cactus this time of year.  They can destroy a large patch of cactus in a day.

Linda got news about Pepsi this week.  He went to school as the guest of honor at an assembly.  From the report we got, he was a perfect gentleman and acted like he had always climbed stairs to get on stage and kiss the principle. 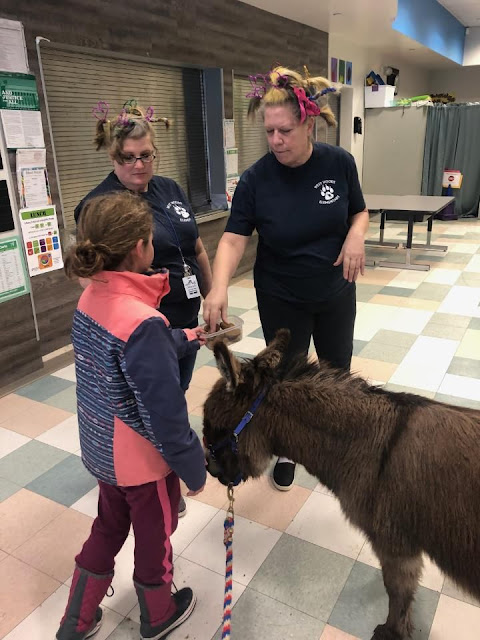 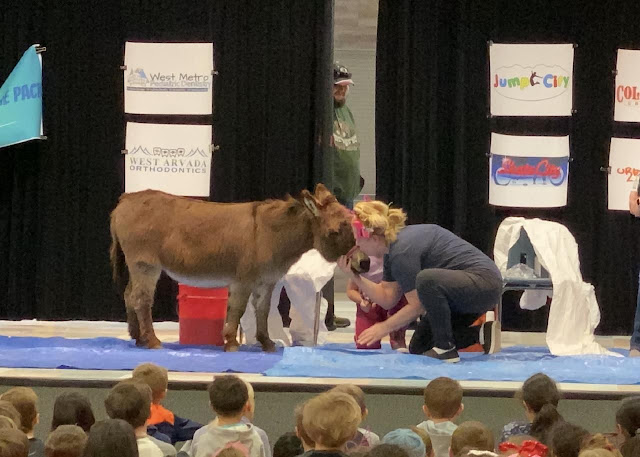 The principle was ready to meet and greet him.

Rambo looked a little skinny in a couple of the pictures, maybe just the angle of the camera. Sorry to hear of the loss to his family. He did have some good years of love and plenty of animal crackers I am sure.

Ellie- The camera angle can slim the look of anything.-at least I use it all the time for selfies! Rambo was in perfect shape. He was exercised and in good health. No reason was found for him passing away, he just laid down and died. He was a loved member of our family and his new owner's family. He actually was the first donkey I bonded with at the rescue when I first started to come out to groom. I loved him! We are heartsick over his loss. You are right he had many many wonderful years full of love and yes animal crackers! We will miss him greatly! ---Suzanne (now full-time resident volunteer)

Thank you, I do love hearing about and seeing the pictures of the kids. It is so easy to bond with most animals, I have a house cat that thinks she is a lap cat. We have to sit down together so she can sit on my lap several times a day and all evening. She likes to sleep on top of me part of the night.

So sorry to hear about Rambo. They do take a piece of our hearts with them...:(

Always heartbreaking. The only good thing is that he did not suffer and died peacefully. That is not often the way things happen. RIP sweet Rambo and hugs for the family that loved him.