Between now and New Year's John and I headed for Vado Speedway in New Mexico to watch some really good racing from the big boys in dirt late models.  They come out to this area to race in the winter, because they can't race in other parts of the country.  There were racers from 21 states and Canada.  Had 3 nights of racing, no really bad wrecks and a lot of good side by side racing.  Wish it had been warmer, but we bundled up and and a great time.

New Year's day was a lot of fun.  All the fun started the day before when the campers started showing up.  We had a potluck that night, with a bonfire.  Next morning the race started at 10am.  A lot of the people had never ran with donkeys before, but it really went pretty well.  A few loose donkeys, but they got caught and the race continued. 
They ran out our dirt road, to the main road, crossed it into the desert, ran in a big wash, circled around and headed home.  A few of the donkeys hadn't planned to run that day and some of their runners turned back rather than try to finish the race.  But they said they had fun, so it was a good day.

Running in the wash

Everyone was talking about next year, so this New Year's day run will probably become an annual event.

Levi has gone into a foster home that will probably become a forever home. 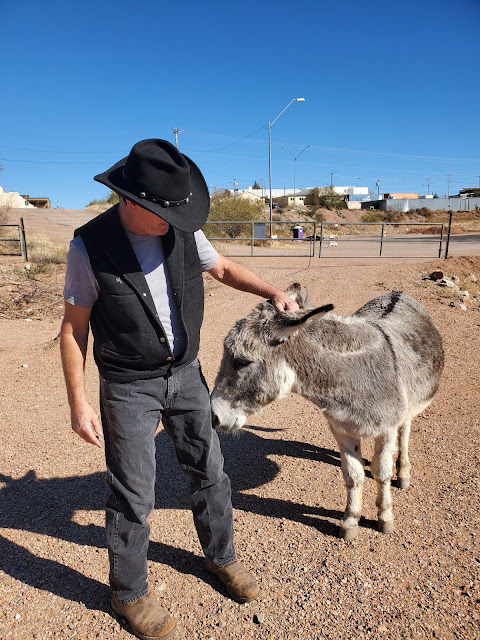 We had not planned on Levi being adopted until he had lost some more weight.  But Angus and Jenny's dad said he'd like to add Levi to his family.

With an area like this to exercise in on a daily basis, how could we refuse..........!!  For now it's a foster, but the donkeys are getting along just fine with each other and we are anxious to see if the rough country will melt some of the weight off Levi.


Thanks Linda and Robert for the pictures and videos