If anyone thinks they aren't, I've got news for you.  Frijolita has a reputation for opening gates, although she's behaved herself for years.  Recently she has reverted to her old tricks.  We had been wondering who was leaving the gate open between her and Tula and in the last couple of days the gate between Tula and Link.

This morning after chores John was out by the pens and saw her working her magic on Tula's gate.  He said she got it open so quick he couldn't stop her, and headed straight for Link's gate.  Mystery solved, she's out there right now trying to get the gate opened again.  There is 3 gates into her pen and John clipped all 3 of them, so she is really working on them.  Hopefully the clips hold.....!! LOL

She's not the only one that opens gates, Leo, Leddy, and Jasper to name a few.  We'd rather not have to clip them, it's harder to open them when you have feed buckets in your hand.  But we also like for them to stay where we put them..............so I guess we'll be clipping gates for awhile.

It seems like right now they have spring fever.  They are eating the prickly pear cactus and also the grease wood bushes.  This is an annual ritual this time of year, must add something to their diet that they need.

The other day Linda caught them in the dog pen.  That gate didn't open by itself.  I see Leddy in there, so he will get the blame.  She said the dogs were hiding out in the feed room.  They probably were upset that the donkeys were in their pen, because the dogs aren't allowed in the donkey's pens.  The donkeys were enjoying all the weeds that have sprouted up the last week or so, it's been sunny and warmer.  Maybe spring has arrived..........!!!  YIPPEE.....!! 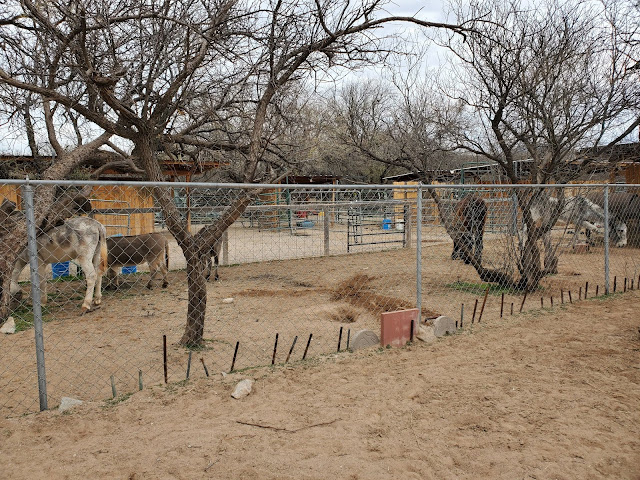 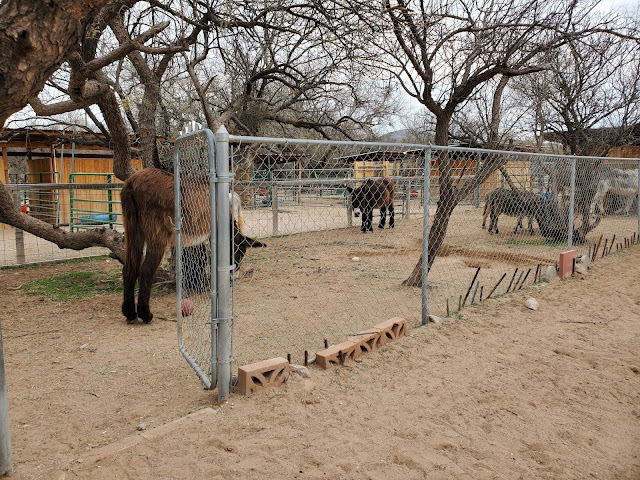