That is all of us.  Between taking care of the donkeys, people races, donkey races, preparing for parades, doctor's appointments (prepare yourself as you age), and getting ready for the car racing season, we all stay busy.

It usually works out there's enough of us to cover for each other, so everyone gets to do their thing.  It's really nice, for so many years John and I didn't have that luxury.  We've fed donkeys supper at noon and wouldn't get home to let them out of their pens until 4 o'clock in the morning, when we were racing 130 miles away in the old days.  Of course they insisted on being fed at 7am just like normal, so it made for a really short night for us.  LOL

We've had quite a few people come out this month to train or just interact with the donkeys one on one, rather than in a tour.


One family came out and spent quite a bit of time, running with the donkeys and learning how to burro race.  Even did a little bit of hill climbing.  As you can tell from the video Sugar has no problem with hills.  Linda said Sugar is getting bored running around here, so they are going to have to find new areas to keep her engaged. 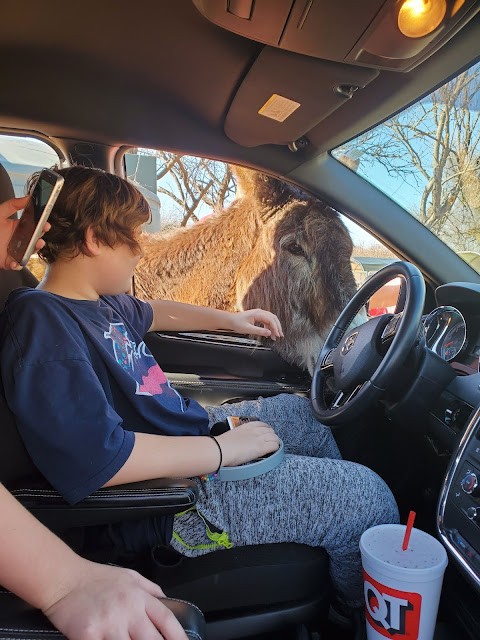 Next thing you know, his big head is INSIDE, and it isn't that easy to get his big heavy head OUTSIDE.....!! 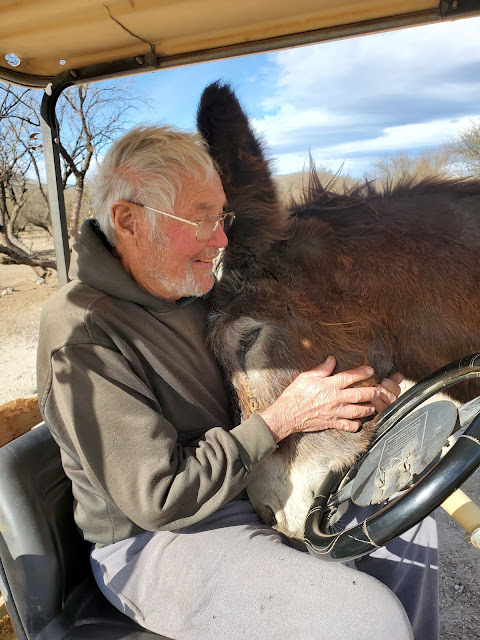 Big Gus working his magic on John.  Gus would stand like that forever if you would let him.  Of course the other day, I had a tour and I guess we weren't paying enough attention to Gus.  He had already taken the tools out of the golf cart, so he started trying to dismantle the metal around the pipes coming out of the well house to the storage tank.  The metal is there to protect the pipes from meddling donkeys, not to be a toy.  Gus has no boundaries, as far as he is concerned the world is his and if you disagree, the problem is yours, it sure isn't his.  He makes life very interesting for everyone around him and it's fun to watch his antics.

Had one pretty big "play" day this month, with the Bray Club.  John and I held down the fort here, while Lynn, Linda and Suzanne loaded up 2 trailers of donkeys and head for Tucson.   They took about 15 donkeys and other people brought their donkeys. 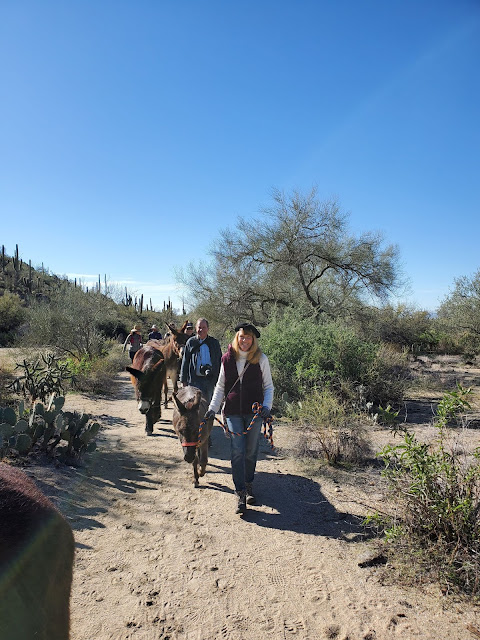 The event was in a very pretty area.  I think that is an important part of planning these outings, it has to be in an area that is pleasing to the eye.


I'm not sure who this donkey is, but he/she has a beautiful gait for pack burro racing.  At least it looks like it to me.

Big Gus is such a ham, he really knows how to push people's buttons.