Suzanne came in this morning when she was grooming and said Cisco had a red spot on the inside of his nose.  That sounded familiar, over the years he's usually gets a couple of habronema sores in his nose and I spend the rest of the summer doctoring them and trying to keep anymore from showing up.

Sure enough, a small red circle with a hole in the middle.  I dabbed at it with a rag and saw the little white larvae, but needed either a needle or tweezers to get it out.  Got the tweezers, some wormer to smear on afterwards to kill any others that might be there.   Suzanne was standing by with SWAT to put on the area to keep the flies from landing on the sore and dropping more stomach worm eggs.

Poor Cisco, over the years every summer we have this relationship, he gets habronema and I dig them out.  Actually this one was pretty easy I dug at it a little bit, rub it with a rag and it was gone.  You have to realize this is on the sensitive inside of his nostril and he's so use to it, he for the most part just stands and lets me dig.

Hopefully in the morning when I check it, it will be dry and healing, otherwise we'll have to keep doctoring until it does get dry and starts healing.

Yesterday afternoon Mikaela came in and said there was a snake in one of the trees.  Hmm...to the best of my knowledge we've never had a snake a tree before, although I would imagine they are we just don't see them.  So we went out and sure enough, it was a non poisonous racer "ie" coach whip, up in the big cat claw tree by the pens.  Momma fly catcher was also in the tree having a conniption fit, which explained why the snake was up in the tree.  We knew she had a nest up there Mikaela has been keeping tabs on it.

Once she got on the ground he took off very fast thru the pens to a rocky area.  Hopefully we scared he bad enough that he will leave that tree alone.

We've also got a dove nest, haven't seen it yet, but the momma has been entertaining John with her broken wing routine, when he gets too close.

A few days ago, the 1st rattlesnake of the season was over in the east pen area on the path between the old and new pens.  Wasn't interested in visiting, Mikaela had time to take a picture and that was about it.  I don't know if they climb trees or not, I sure hope not.  That would be a big surprise if one of those happened to drop on you.  I know snakes can fall, a friend of ours when I was a kid had one fall out of a tree and land on her shoulders..........glad it wasn't me....I'd probably still be running........!! LOL 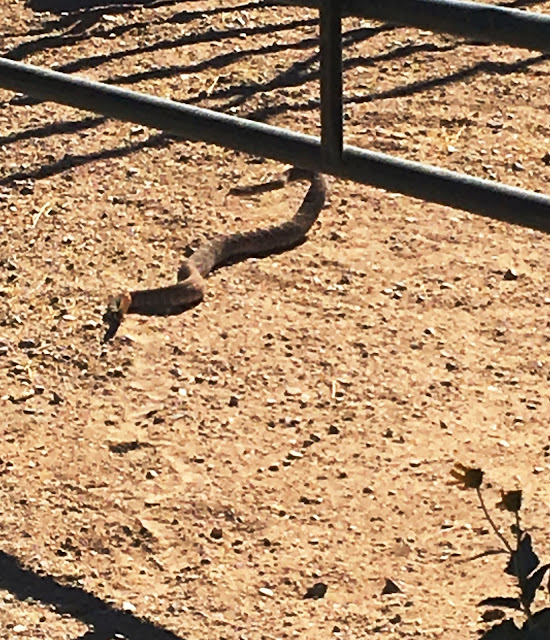 This is what is called a doggie calf.  Our neighbor is taking care of it for a week for one of the local ranchers.  Her momma isn't 2 years old and didn't have any milk, so Itsey Bitsy is being raised as an orphan.  She was premature and Jorja thinks she only weighed about 10 pounds when she was born which is really small.  She is a Corriente which is one of the oldest breeds of cattle in the U.S.  So far she is doing good, Jorja is keeping her in her horse trailer, as tiny as she is, a single coyote could  kill her.  Nothing can get in the trailer, although it must be pretty boring in there all by herself except for 3 times a day when she gets fed.