It's been interesting around here the last couple of days.  We took Don and Bill to their new home a couple of days ago.  They had been boarding here for almost 2 years while their family built a new home and it finally got finished.


This is the boys checking out their new pen.  You might notice there isn't a thing in it to eat, so they will only have access to whatever Ginger feeds them.  They may end up losing some weight after all......!!!  LOL  For right now they are in a pretty good sized pen area, and the long term plan is to fence in the acreage and let them have the run of 2 or 3 acres, I forgot how many acres they have.

On the way home we picked up Big Gus aka B.G. and Rambo aka Beau from the rescue where their owner left them, rather than returning them to us as the adoption contract required.  We noticed a lot of flies on B.G's front legs and a couple of sores.  He also smelled really bad, so we got them in the trailer and headed home.

Lynn and Linda worked with them yesterday, checking their feet and both of them have pretty bad thrush and B.G. also seems to have canker.  I have never even seen a case of canker. It's one of those diseases that has almost been wiped out, in modern times, by good hygiene.

I got in touch with Tyler and he will come out as soon as he gets a chance to see what can be done for the boys.  It will probably be a long term project.  B.G. is limping pretty bad on his left front, which is where they saw the canker goop.  Thrush usually isn't crippling, but from what I've read canker is.

We knew from when B.G. was here before he is a gate opener, found out yesterday that Beau also has the touch.  He was out and about, being chased by little Justin.  Justin better be careful, Beau can be a handful.  John and Linda got him in BlackJack's pen and Linda put a halter on him and led him back to his pen.  She said she could feel the strength in him, just in that short walk.

Dr. Jeremy is coming out as soon as he gets a chance to check out the new kids and a couple of other ones, like Boaz that is still having problems with summer sores even though the nights are getting down in the low 40s.  While he is here, I'm going to see if he can run a testosterone test on Boaz to see if he in fact a gelding, rather than a proud cut jack.  His behavior seems aggressive for a donkey gelding.  If his testosterone level is higher than it should be, I don't know if anything could be done to fix the problem.

Found out tonight Lynn caught Casper outside the fence a few days ago.  Lynn said he called to Casper and he came back inside the fence.  So we don't know if the little devil is sneaking out on a regular basis or not.  He does seem to be a free independent spirit........!!!  LOL

Lately when Casper gets out of his pen, he usually goes over by Loki Joe's pen and waits for him to get out.  So I assumed they had become "buds"..........guess not, at least I don't think Loki is capable of going under the fence like Casper does. 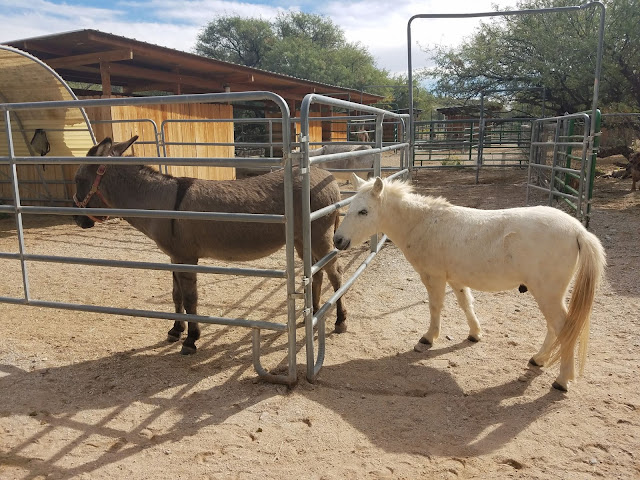 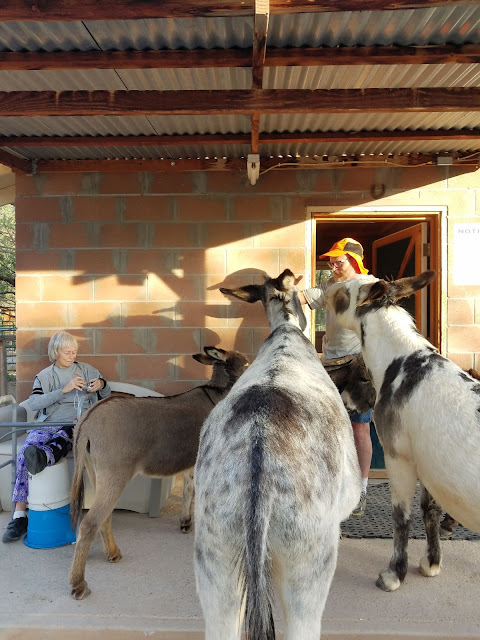 This is Justin, Leddy and Leo, telling Lynn how hungry they are at the feed room door.  This was the first day I went out with the donkeys.  They wouldn't hurt me on purpose, but with my leg tied up in the brace, I couldn't move fast enough to get out of their way.  You can tell I have no treats, but they are pretty sure Lynn has some, it's just a matter of getting him to let go of them.........!!!  I was pretty safe sitting on the bench and they know I don't usually carry treats, so they pretty much ignored me.......!!
Posted by Tish at 8:42 PM

How old is Casper? He is such a pretty little guy.

He's about 17 and very use to taking care of himself, I guess because no one else ever did. You can watch the little wheels spinning in his head when he's figuring out his next move. Such a little stinker, love to watch him work the system.