Seems like the last few days have REALLY been hectic, more so than usual.  I've never understood people that say they are bored.  I'd like to try for some of that boredom, just to see what it's like......!!!!  LOL

BlackJack and the gang hope everyone had a great Thanksgiving with lots to eat.

Lynn and Linda finally headed for California yesterday a day late.  They were hoping the RV for them to stay in on the tree lot would be there yesterday, but when they got there last night..........no RV.  The boss said he'd get them a motel........yep like that's going to happen with 4 large dogs.  They ended up staying in the booth where people pay Linda for their trees for the night, with 4 dogs to keep them warm.  They were suppose to go to the doggie beach today, but haven't heard if they are instead embroiled in setting up the lot to open up tomorrow morning.  Set up isn't their job, but you know how that goes sometimes.....!!!  And so far there seems to be a few "problems"........!!!  LOL


We ate Thanksgiving with our friends Terry and Larry.  Linda has been doing the feed pans since I've been gimping around with my little friend "Bracie", so when we got home from dinner, I got to relearn the feed pans.  A few changes and of course Bella and Levi have been added.  Not sure what else has changed.  It isn't too bad, but there are 27 pans to deal with and if we had been planning ahead we would have built a larger feed room.......LOL  The pans are in 5 groups to put in order, and it's going to take a few times to figure out where to put them empty and where to put them when they are ready to go, so the sequence makes sense.  Maybe I should have went out and watched Linda a couple of times before she left.  As small as the feed room is, I'd have been in the way.....!!

The doctoring is down to just 3 with a few of the others being observed, to make sure they don't erupt with something new.  Still doctoring Bella's eye although it is getting better, slowly.  Where the 2 areas of proud flesh were cut off are looking really good, hopefully they will heal without the proud flesh coming back.

Link has rubbed his butt so that's getting doctored, hopefully the hair will grow back, so far he has a bald area.

Big Gus, has his place on his fanny, it's getting better, although John says there is an area that looks like the skin and hair has a pushed up area.  I have been staying away from Big Gus, although he doesn't seems to be squirrely, but he's big enough if he turned quick, I wouldn't be able to move fast enough to get out of the way.  But I guess I'm going to have to go look at his butt to see what is going on.

I guess Rambo is finally fitting in, he hasn't had any new swollen places or chunks of hair missing for the last few days.  He certainly has been a surprise, I don't think he's even yelled and screamed at any of the donkeys lately.  Lynn's already talking about taking him to Colorado next summer to see if he wants to be a pack burro racer.  He's strong and pretty quick, so he might make a good one.

We are signed up to the Tucson Rodeo Parade again February 21, 2019.  There will be some changes this year.  Since Lynn and Linda have been working with The Running Shop and some of their runners with the donkeys, I signed up for 12 donkeys and handlers for the parade, just in case others would like to participate.  Last year we only had 6 donkeys and handlers, and the donkeys were quite a hit.  Unfortunately we didn't get to finish the complete route, so that is our goal this year.

Last year we dressed in western period costumes.  I suggested this year blue jeans and t-shirts with our logo on them.  Much simpler but not as eye catching.  The rodeo is a theme, of western, cowboy, native American, etc. so you can't just wear anything.  Maybe we could mix the two ideas together, any ideas would be appreciated.......!!! 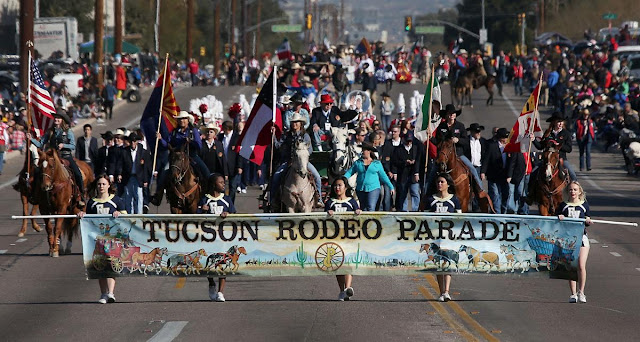 We've also got to come up with an idea for the Salute to the Troops parade in Tombstone this year.  We've been in it 2 years and finished 3rd both times.  We're determined to finish 1st, still working on ideas.  We've got flags for each branch of the services, but if anyone has ideas for costumes, let me know.
Posted by Tish at 12:22 PM