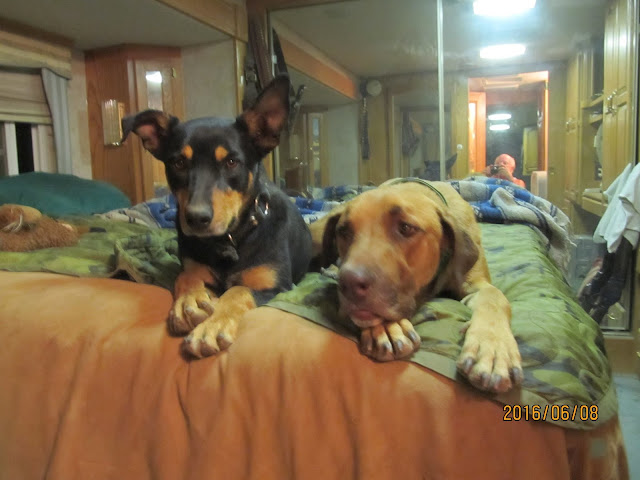 Thanks for the pic, Doug

As you can see Saddik has shown Punch (couldn't get it changed, so Punch it is) how to hang out in Doug's RV.  They spend the nights in there on the bed.  Saddik is a sprawler and Doug says Punch is a cuddler.  We have enough problems with cats, Nigel especially, certainly glad we aren't sharing with 2 fairly large dogs.....!! LOL   The cats would have a conniption  fit if the dogs came in the house,  I'm afraid.  And the dogs would probably chase cats, which wouldn't bode well for all the "stuff" in the house.  If they got close to the cats before the cats got under the bed, there would be a mess and probably some clawed eyes.  Neither of the dogs are hunters, although Saddik loves to chase lizards, all he's caught is one tail and he had no clue what to do with it.  Punch isn't even interested in lizards.

Punch is very needy, he wants to be with you and up against you.  He's also a follower, so Saddik is passing on his "let's go see what's out there" adventures.  So far they come back after about 30 minutes, we think they go across the road to play with the neighbor's dog and are ready to go into the dog pen and air conditioned feed room when they come back.  I hope Saddik doesn't take Punch off for the day like he did Lucy, Lynn and Linda's older dog.  She was completely wore out by the time they got home, she collapsed by the pens and wouldn't move.

Speaking of Lynn and Linda, they have a new family member named Leddy. I don't know what took them so long to find a donkey of their very own. Wonder how long it will be before the "herd" starts growing?  LOL 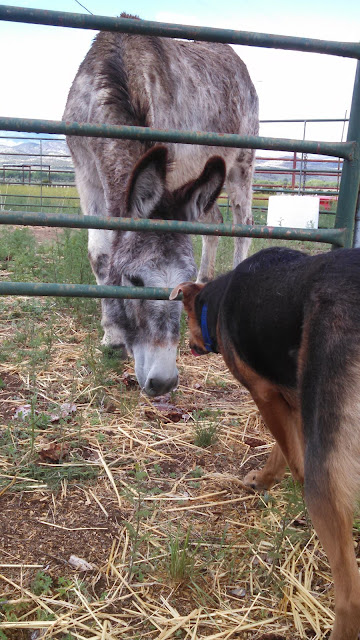 Leddy meeting his "brother from another mother", Lennon. 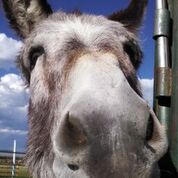 The obligatory "snot shot"....... between being very curious and thinking you might have a treat, sometimes this is as far away as you can get from a donkey......!! 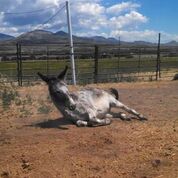 Marking his new home as his very own.  Thanks for the pictures, Linda

From what we've heard I think they are spending every minute they can with him.  Linda called John yesterday to wish him a Happy Birthday, and they were out in the pasture taking Leddy for a walk.  Every donkey should be so lucky to have such an indulgent home.  We told them he can come down with them next winter for Longears Camp, who knows maybe he will get to meet our gang.  First they will have to find a trailer..........LOL

Hot enough here to cook eggs on the sidewalks I think.  Suppose to be hotter each day and the week-end is suppose to be 110* in Benson, 113* in Tucson Saturday, and even hotter Sunday.  I will be racing Saturday night and not looking forward to sitting in staging waiting to go out on the track with all my gear on, from helmet to fire suit.  It wouldn't be so bad, but if the race ahead of you doesn't go well, as in lots of yellow flags, you get to sit for a long time, stewing in your own juices..........UGH!  What we do for fun sometimes...!!

Doing OK with the doctoring right now.  We have 7 that have to be doctored every morning and in Boaz's case every night too.  We're fighting his annual crud on his sheath, it's been scraped and tested with no definitive results.  So we try this and we try that.  Right now the Columbia Vet Powder which is zinc oxide in powder form, seems to be working the best.  I was using the thuja zinc oxide which is a paste, it kept the flies at bay, but really wasn't helping with healing.  Been doing it this way for a couple of days, and so far, so good.

He also has his annual habromena larvae infestation in the side of his mouth.  It seemed like he was fine one day and a couple of days later, the spot about the size of a quarter on the edge of his mouth had erupted into a problem.  He's really good about letting me pick them out with tweezers, so we do that each morning, I slather the area with ivermectin wormer and we are actually getting ahead of them.  The wormer kills the larvae on contact.   I'll have to watch him even after it heals up, until winter or they will be back.
Posted by Tish at 2:43 PM

Soon the rains will come - and the mesquite beans!
Sp - Lynn and Linda are going to travel with a donkey now? They need a stock trailer fitted out with a hog panel divider and end gate for a nice safe and airy place for both the doneky and the dogs when they make stops but can't let everyone out to run around.

Thanks for reminding me about the beans......LOL It looks like we're going to have a bumper crop, unfortunately.

I don't know if they will travel with Leddy or not, Lynn's family has 40 acres and a couple of horses, that's where he is staying. They live close, but haven't got a fence up yet. So he's got a place to stay when they travel.